"A collaborative pioneering spirit and unwavering commitment to product and service quality have underpinned our growth," says James Altmann, co-Director with the Australian company Biological Services. The company is celebrating its 50th anniversary this year and over that time their mission has always been to help future-proof pest control in agriculture. Today, Biological Services is Australia’s largest biological control company and is a recognized pioneer of IPM in Australia.

In the 1960s and 1970s, Australian agriculture looked quite different from the industry it is today. "Pest management was almost completely reliant on chemical control often on a regularly scheduled basis. The main pesticides were residually toxic broad-spectrum products from organophosphate, organochlorine, carbamate, and pyrethroid groups. Some of these are still used. Many have since been banned for toxicity or are no longer effective as the pests have adapted and have become resistant to them," James shares.

Red Scale problem became the catalyst for change
In this era, Red Scale in Citrus was spreading quickly and was difficult to control. Departments of Agriculture in South Australia and Victoria embarked on an innovative biological control research project based on similar programs in California. This proved successful and led the way for a commercial insectary to supply parasites to the citrus industry.

Enter Biological Services, Australia’s first commercial insectary established in 1971 by Ron and Beryl George to breed Aphytis melinus for control of Red Scale. Their program was a great success, and significantly, reinforced to entomologists and growers that Integrated Pest Management (IPM) was a viable and more sustainable method than spraying alone. "While the concept of IPM was widely taught in agricultural courses, very few growers used beneficial organisms in the pest management approach before the 1990s."

Above: This was the first insectary in Australia,1971. Aphytis were first collected and released in test tubes.

Only spraying when really necessary
Biological Services co-Director, James Altmann, took over the reins in 1987. He and his wife Simone set up a commercial pest monitoring service promoting an IPM approach: conserving natural enemies, releasing key beneficials, and only spraying when really necessary. A focus of the couple was to increase the range of mass-produced beneficials available for Australian agriculture. Greenhouse crops were a particular focus due to successes being realized in the UK, Europe, and Northern America. A Churchill Fellowship in 1992 allowed James to travel and make some valuable lifelong insectary contacts particularly in Israel, Europe, and North America. Insectary businesses were smaller and more open at that time, particularly where there was no threat to competition and collaboration was good for both parties.

James says the first few years of business were difficult.

“Some growers were really proactive, others didn’t want to know,” he said. “There was a portion of the industry that actively denigrated what we were trying to achieve. Our belief and drive were strong, however, and we actively aligned ourselves with educated people who had the same ideals, which included key growers, Department entomologists and insectary colleagues in Australia and overseas. There were many trials, failures and some successes and we learned from every one of them”, James said.

In 2010 Biological Services started collaborating with Manchil IPM Services, run by Lachlan and Jody Chilman. Their business was established in 2002 rearing Phytoseiulus persimilis for Two Spotted Mite control in the Western Australian strawberry industry. Together, the companies developed complete IPM programs for key pests such as Two Spotted Mite, Whiteflies, Aphids, and Thrips throughout Australia. Key program successes were achieved in Greenhouse crops and berries.

Above: The insectary at Muchea taking shape in 2002, and expansions in 2016. Company Directors, James Altmann and Lachlan Chilman.

In 2014 the two companies merged, with Lachlan and James becoming joint Directors of Biological Services. Together with an active and ongoing R&D program, they continued to increase their range of beneficials, now offering 23 commercial products and repeatable pest control programs for many high-value horticultural crops.

Celebrating 50 years
Today, Biological Services is Australia’s largest biological control company and is a recognized pioneer of IPM in Australia. "We continue to forge a reputation as a provider of high-quality beneficials and IPM expertise for Australian conditions," says James.

This year, Biological Services entered into an international association with Biobest. The business now has access to extra assistance for developing new services and IPM related products. "All of our staff have access to another level of collaboration with Biobest's R&D, production, IP, and consulting staff." 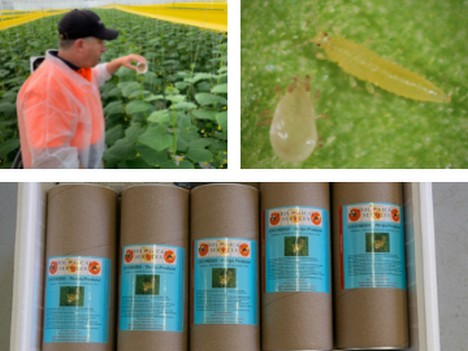 Above: Loose predatory mite material ready for dispatch and being released into cucumbers for thrips control.

People and tools
Lachlan credits a commitment to ensuring the company has the right people and tools to serve our clients to the highest standards.

“Since 1971, Biological Services has been helping commercial growers achieve healthy and sustainable yields through the use of beneficial organisms. This is now combined with on-site integrated pest management consultancy across Australia,” said Lachlan.

“We take pride in the quality of our beneficials, and we employ entomologists, horticulturalists, and agricultural scientists to give on-site agronomic advice to our clients, designing IPM programs that are specific to them.

“As a result, we’ve grown from a two-person operation to a 50+ strong team across Australia over the past 50 years. IPM is now seen as the cornerstone of pest management worldwide in many cropping systems. It has been a great learning experience to have been part of the instigation of sustainable pest control programs in Australia,” said Lachlan. 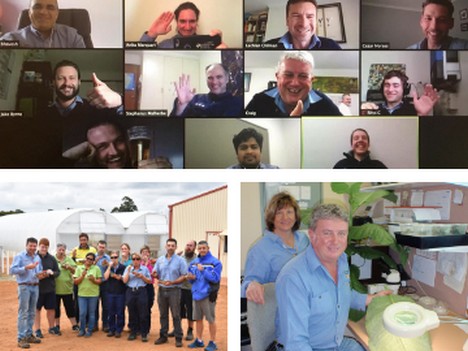 Above: The Biological Services Consultant team meeting online during 2019. Muchea staff in 2018. James and Simone in the lab.

James agrees, noting the value of the collaborative effort to driving change.

“We thank each one of our staff, clients, and collaborators – past and present - for working alongside us to reduce the use of chemicals in Australian agriculture in the interests of growers, consumers, and our environment,” James said. “There is still plenty of work to be done – so here’s to the next 50 years!”