The Fusarium oxysporum species is a ubiquitous fungal inhabitant of soils throughout the world.  Members of this species complex are commonplace in the microbial communities of plant rhizospheres of cultivated crops, monocots and dicots, ranging from tropical to temperate climates.  While many strains of F. oxysporum are harmless saprobes, others are considered significant plant pathogens, even limiting factors to crop production.

Symptoms
Amongst the symptomology induced by F. oxysporum, vascular wilts are most common.  Fungal mycelia are soil-borne and enter the plant via natural openings or damaged tissue in the root system.  Thereafter, the pathogen invades the xylem tissue and grows acropetally, clogging xylem vessels, producing microconidia and impeding the upward movement of water and nutrients.  Infected plants display severe chlorosis, unilateral wilting and overall collapse.  Plants infected with strains inducing crown and root rots display progressive necrosis of the root system and aerial basal tissue.  Mycelia do not penetrate the vascular tissue during this pathogenesis, but plant death occurs nevertheless, due to collapse of the root system.  How strains differentiate host and colonization strategy is not well characterized.  However, it is hypothesized that the fungi regulate these processes based on host plant anatomy and gene-for-gene interactions.  The research investigating this genomic basis is ongoing. 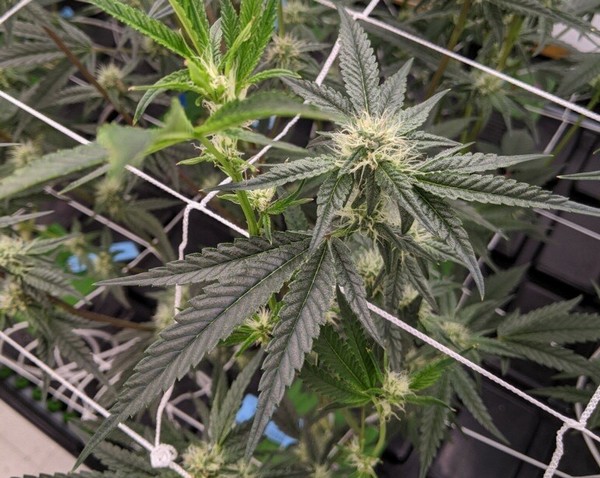 Following plant death and collapse, the fungus invades all tissues extensively until it reaches the external environment, sporulates profusely and is disseminated via wind or splashing water.  As a facultative parasite, F. oxysporum can persist in soils for decades.  Survival spores (chlamydospores) can remain dormant for several years, and mycelia can persist in minute amounts of crop debris, in the absence of cultivated hosts.  In greenhouses, infective propagules can endure on tools, work surfaces, pots and trays, and in substrate.  Furthermore, irrigation water and propagation baths can spread spores throughout facilities, fostering outbreaks.

Infection
Fusarium oxysporum is spread long distances via movement of infected plant materials such as cuttings, transplants, roots, bulbs and corms.  Furthermore, spores and mycelia can be transported in infested soil on shoes and clothing, tools, equipment and in surface water.  Its persistent nature and multiple avenues of dissemination make eradication of this pathogen impossible within affected areas.  Fungicide applications are impractical in field-grown crops, due to large acreages and the limitations of fungicide movement through soils.  Drenches are utilized in greenhouse crops with success; however, crops such as cannabis are subject to organic growing standards, precluding the use of synthetic fungicides.  Genetic resistance is effective in crops such as tomato but is not widely available amongst hosts of F. oxysporum strains.  Exclusion of the pathogen through rapid containment is the most effective management strategy.  This makes the diagnostic testing of plant materials paramount to successful disease management programs.

An assay to detect it
Agdia’s new AmplifyRP® XRT assay for detection Fusarium oxysporum is based on recombinase polymerase amplification (RPA).  This technology promotes the rapid amplification and detection of nucleic acid targets, DNA or RNA, while maintaining a single operating temperature of 39 – 42 °C.  The AmplifyRP® XRT products achieve target sensitivity and specificity comparable to PCR, while having clear advantages over the lab-based technology. AmplifyRP® XRT products do not require a nucleic acid purification step; crude sample extracts are prepared using a simple extraction buffer and tested directly.  This makes the testing process simple and saves the end-user valuable time.  Furthermore, this facilitates the implementation of this technology at remote locations with limited resources.   When paired with Agdia’s AmpliFire® isothermal fluorometer (figure 1.), the XRT system is a rapid, user-friendly tool that can be implemented in the field or the lab by personnel with limited experience in molecular diagnostics.

Agdia states their new assay was screened against multiple formae speciales of Fusarium oxysporum, including cannabis, chrysanthemi, fragariae, latucae, lycopersici, niveum and vasinfectum, detecting all true positives.  Furthermore, a high level of specificity was observed with an extensive exclusivity panel of multiple species of Fusarium other than F. oxysporum and additional fungal and oomycete pathogens, including Phytophthora spp, Pythium spp., Rhizoctonia solani and Verticillium dahliae.  Sensitivity for this assay is comparable to that observed with the published qPCR assay and greater than the published conventional PCR assay to which it was compared.  This product was developed to test crown, leaf, petiole, root and stem tissue.  This assay contains an endogenous internal DNA control.

Agdia now offers AmplifyRP® XRT products for detection of several important bacterial, fungal, viral and viroid pathogens across several markets, including grape, cannabis, ornamental, potato and tomato.  “We are working to develop a comprehensive portfolio of easy-to-use diagnostic products on our AmplifyRP® XRT platform.  Customer demand for assays that can be implemented across a wide spectrum of applications has driven our production.  We continue to focus on product development for established customers and burgeoning markets, such as the cannabis industry,” said Robert Emmitt, Domestic Account Manager, Agdia