CAN: Several Pythium species found to cause root rot on greenhouse-grown cannabis

There are many different reasons as to why a plant might be affected by root rot. Such a scenario is especially dreadful for cannabis growers, considering the high value of the crop, which is why Zamir K. Punja et al. have studied the causes of the emergence of root rot in greenhouse-grown cannabis. They have sampled tissues from 140 diseased plants and, after some analyses, the researchers identified different Pythium species responsible for said root rot.

What is root rot?
Symptoms of root rot can be stunted growth, yellowing and wilting, pith discoloration, and plant mortality. Usually, such an infection occurs during the early stages of plant growth, with said symptoms coming up only later on. Previous research has identified Fusarium and Pythium as responsible for a range of disease symptoms, yet Punja et al. report that, in 2018-2019, some infected greenhouse-grown cannabis plants in BC did not match the aforementioned previous description.

“On vegetatively propagated plants, total destruction of the root system followed by plant collapse was observed in four commercial greenhouses,” the paper reads. “On flowering plants, extensive root decay led to rapid wilting and plant death, while on stock plants, root browning with no apparent foliar symptoms was observed.” Thus, the researchers set themselves to analyze the main causes of such plant diseases to develop a protocol to assess the different Pythium species on cannabis plants. 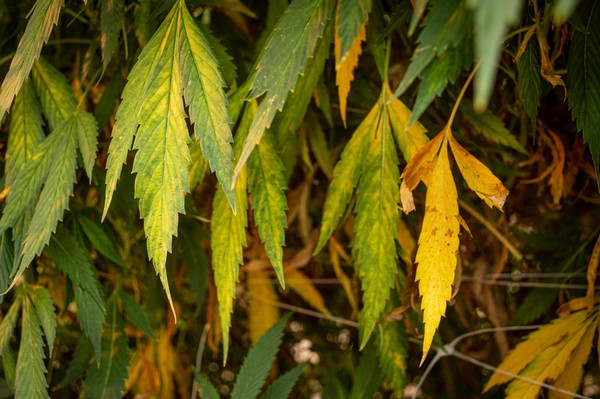 Identification
After growing the cuttings, the researchers proceeded to isolate the different Pythium species that caused the disease symptoms. They found that wilting and darkening of the leaves with yellowing and necrosis of the lower leaves, together with destruction of the crown and root tissues, was associated with P. myriotylum, and a very quick, extensive wilting and yellowing of the lower leaves followed by a destroyed root system was associated with P. aphanidermatum. When the plants completely collapsed with a destroyed root system, it was associated with P. dissotocum. On large mother plants grown for 6-8 months, roots developed a surface browning, and this was shown to be the result of P. catenulatum. On top of that, they noted that “all Pythium species identified in the present study, with the exception of P. ultimum, can produce sporangia that release zoospores which are readily disseminated in the recirculating hydroponic nutrient solution.”

Controlling the infection
Considering the few fungicides that cannabis growers are allowed to use, the researchers explain that disinfectants like Chemprocide, Zerotol, and sodium hypochlorite may be partially effective in reducing Pythium build-up. At the same time, there are biological control agents that can be used to control root pathogens: Trichoderma harzinanym, Trichoderma asperellum, and Gliocladium catenulatum. They do point out that further studies to compare the efficacy of these different control agents are necessary, as well as investigating other potentially useful biocontrol agents. “Together with Fusarium species, Pythium species represent the greatest challenge commercial producers of cannabis in Canada are facing,” they conclude.