Located approximately 10 miles north of Buffalo in North Tonawanda, Wheatfield Gardens is a 550,000 square feet hydroponic indoor agricultural facility producing high-value crops with energy-efficient technology. Since 2015, Paal Elfstrum, the CEO and founder of Wheatfield Gardens, has worked to revitalize the facility. When the opportunity presented itself to install a next-generation, adaptive lighting control system, Elfstrum did not hesitate.

In 2018, Wheatfield Gardens installed dimmable LEDs offering a light spectrum control along with a threshold-based controller. "The original light controller was very comprehensive,” said Elfstrum, “but it was over-engineered for the purpose of controlling the lights and what we wanted it to do.”

Energy-efficient technology
In 2019, the New York State Energy Research and Development Authority (NYSERDA) provided funding for a Candidus adaptive lighting controller — a technology that controls the amount of light needed to maximize a greenhouse facility’s energy efficiency. The controller was set up in a 2,100 square feet test plot consisting of 26 LED fixtures over a culture pond growing butterhead lettuce.

Two plots were configured for the same daily light integral (DLI) target. The existing controller was programmed to shut off temporarily whenever combined sunlight and supplemental light exceeded a threshold of 500 micromoles, and the adaptive lighting controller was initially programmed to prioritize achieving the DLI target and later updated for maximum energy savings through control instructions, limiting light output to 50% prior to 9:00 am to avoid overshooting the DLI.

“We can compete in the winter because of LED lights. When the sun comes out in winter, we receive enough light for the controller to automatically shut off the lights and save energy," said Paal Elfstrum, CEO and founder of Wheatfield Gardens Electricity.

Each plot was metered over a seven-month period to assess relative energy performance. Crop performance was independently monitored during this period, which included photograph documentation of the crops during growth and recording lettuce head weight at harvest. 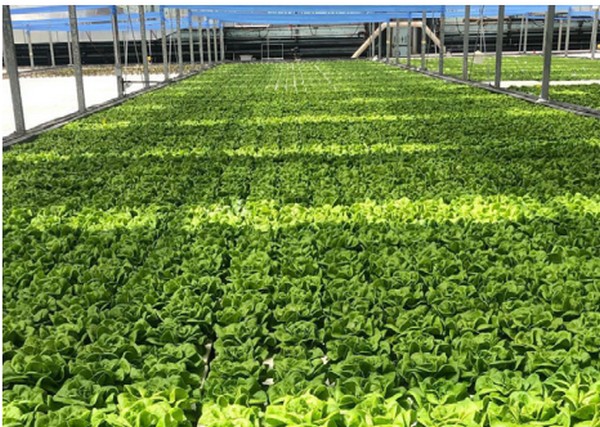 In addition to directly metering energy use in each plot, the energy savings potential of the controller was modeled using the on/off and dimming signals monitored by Candidus software. Estimated energy savings was independently verified to conform precisely with the metered energy use in the test group.

Results
Using the modeled control plot baseline showed substantial energy saving potential for the adaptive lighting controller. Energy savings was approximately 4.4% in January, but increased as the days became longer, eventually reaching 52.2% in May. Energy savings potential in winter is lower due to limited sunlight and less opportunity for dimming supplemental lights during the lights-on period. The supplemental lighting system operating at full intensity was insufficient to achieve the target DLI, resulting in both the control and test plot lighting fixtures operating at full power almost continuously in January.

The results of the crop monitoring showed no significant differences in the visual appearance or weight of the butterhead lettuce heads.

Benefits
Elfstrum said the real advantage of installing the Candidus controller is the ability to dim lights on an active basis for cost and energy savings. “When the sun comes out in winter, we receive enough light for the controller to automatically shut off the lights and save energy.”

Elfstrum also likes the controller’s ability to track trends and lighting use history. “The controller has the functionality that we wanted,” he said. “It is more intuitive than any other controllers we considered as it was designed specifically for growing. Many controllers have been designed by lighting company engineers with no agricultural experience.”