US: Republicans file bill to end prohibition, regulate industry as alternative to the MORE act

Yesterday, Rep. Nancy Mace introduced a GOP-sponsored bill to federally legalize and tax cannabis. The States Reform Act - that is the name of the bill - comes as an alternative to the Democratic MORE act.

The bill sponsored by Republicans would end federal cannabis prohibition while setting up a regulatory framework for existing cannabis markets and businesses to keep operating without interference from the federal government.

On top of that, the bill would establish that cannabis should be treated like tobacco: this practically means that the industry would be divided into specific sectors, each controlled by a different body. The medical usage would be overseen by the FDA, growers by the Department of Agriculture, and adult-use and law enforcement by the Bureau of Alcohol, Tobacco, Firearms and Explosives.

Additionally, the bill would cancel cannabis-related federal crimes penalties as well as expunge non-violent cannabis convictions. Furthermore, cannabis products would have a 3% federal excise tax, and cannabis businesses would be treated equally by the Small Business Administration, which would make cannabis companies eligible for government financial assistance, grants, and so on.

Rep. Mace commented: "Today, only 3 states lack some form of legal cannabis. My home state of South Carolina permits CBD, Florida allows medical cannabis, California and others have full adult-use, for example. Every state is different. Cannabis reform at the federal level must take all of this into account, and it’s past time federal law codifies this reality. 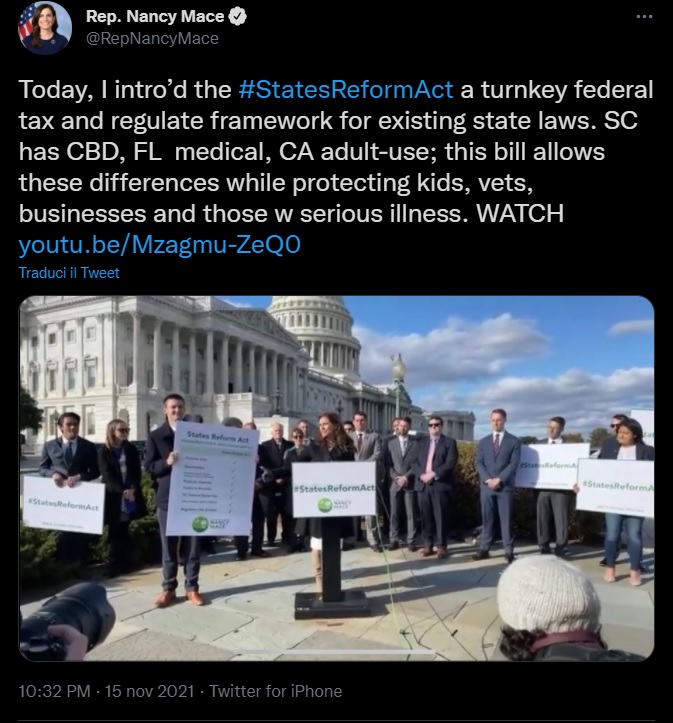 “This is why I’m introducing the States Reform Act, a bill which seeks to remove cannabis from Schedule I in a manner consistent with the rights of states to determine what level of cannabis reform each state already has, or not.

“This bill supports veterans, law enforcement, farmers, businesses, those with serious illnesses, and it is good for criminal justice reform. Furthermore, a super-majority of Americans support an end to cannabis prohibition, which is why only 3 states in the country have no cannabis reform at all.

“The States Reform Act takes special care to keep Americans and their children safe while ending federal interference with state cannabis laws. Washington needs to provide a framework that allows states to make their own decisions on cannabis moving forward. This bill does that.”

The States Reform Act is being seen as a compromise between the GOP positions and the Democratic MORE act, which included a higher excise tax and social equity programs.

As reported by Marijuana Moment, Weldon Angelos, an advocate who has worked with Rep. Mace’s office on the legislation, said that one of the main objectives of the bill was to facilitate a bipartisan conversation about what legalization should look like. While there is more he would like to see done, particularly in the way of social equity provisions, this is seen as a good starting point.

“The whole idea behind the Cannabis Freedom Alliance wasn’t to have the Republicans steal this [issue] from the Democrats. Just so we’re clear, that’s not the reason behind this bill,” Angelos, who was pardoned by former President Donald Trump for a federal cannabis conviction, said. “The people behind the scenes, like my organization, just want to make this a reality, and we can’t get there without this step, which is this bill that’s been introduced by Congresswoman Nancy Mace.”