CAN (BC): Greenhouses working hard around the clock to come back after floodings

"There is and will be much work to be done to get the BC Farming industry back on its feet," the team with Prins Greenhouses shares. Last week, during the floods in British Colombia, their company was damaged severely, and they are working hard to get back on their feet. 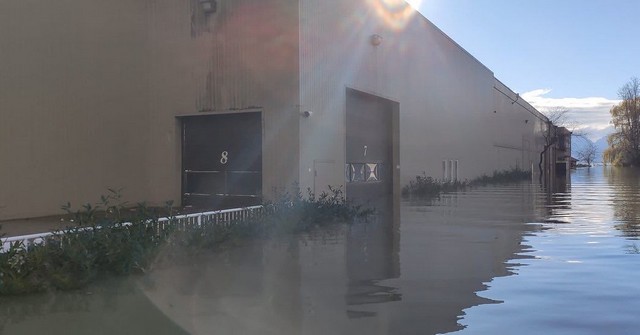 Prins Greenhouses has an office in Ontario and in BC. Last week, their BC office had to close due to flooding and highway closures. Fortunately, the whole team remained safe. "Our emails are working again. Our (604) office number is still out of commission, but everyone is available via cell phone. We plan to have our data and IT back up and in operation," they share in an update. "We are thankful for all friends and industry colleagues who have called and reached out to us, asking for our wellbeing."

Extreme weather
Last week, from November 14, a flood in British Columbia swallowed highways, washed away bridges, and cut off railroads. At least four people did not survive, and roughly 17,000 people were forced away from their homes. Vancouver lost its road and rail links to the rest of the country, cut off by washed-out bridges and landslides.

For greenhouse growers, the roadblocks provide a serious issue. The team with greenhouse company Sunterra, for example, is working around the clock to ready their new greenhouse for plants next week. "Despite the catastrophic flooding in BC, our friends at Houweling's Propagation have miraculously found a way to re-route 15 trucks to deliver on time," they share. A video demonstrates Meteor Systems installing their grow system in the new greenhouse structure (courtesy of Prins Greenhouses and electrified by Iconic Energy Solutions). "Amazing teamwork from all of our partners as we near the finish line on construction."

Food industry
After flooding and landslides in southern British Columbia cut off highways and disrupted rail lines, transport is an issue for food companies as thousands of transport trailers are stuck due to impassable highways. Canada’s retail industry has been scrambling to move goods from Alberta to parts of British Columbia, where many consumers were stocking up on groceries and other household items after flooding cut off major trade corridors in and out of Vancouver last week. With the storm causing major closures across a number of BC highways, the Ministry of Transportation has created a new website to show the current status of the impacted roads.

Cannabis industry
Also cannabis growers have been affected by the floods, as reported by Yahoo News. Several cannabis companies say portions of their facilities are submerged in water. Problems, however, will also affect the transportation of cannabis products

While a lot of cannabis travels by truck across the province, so many roads being washed out mean that is no longer an option for many deliveries, said Lisa Campbell, chief executive at cannabis marketing company Mercari Agency.

The companies expect it will take longer than usual for products to make it to consumer's hands as the stormy conditions hamper deliveries, drive up costs, and make their already slim margins on many products even thinner. "It's one of those things that is devastating to a business," said Alex Read, president of Jima Cannabis.

Food system
In a recent article on Financialpost.com, Evan Fraser, director of the Arrell Food Institute at the University of Guelph, said the storm is a reminder of how the food system must change as well. "For the industrial food system to operate, oil and other fossil fuels must be cheap, water for irrigation plentiful, and the weather productive. Countries must also let goods and services flow across borders. When these conditions were met, the industrial food system was remarkably successful, but the world isn’t like this anymore."

He suggests Canada stop importing fruits and vegetables from places like California, and to use techniques to become sovereign. "It will also mean building more vertical farms and greenhouses that produce locally and year-round. If we do this, we can save land, reduce carbon emissions, and boost self-sufficiency."