Gas exchange, transpiration, and the mystery of stomatal control

Plants have a mechanism which allows them to control gas exchange and enhance transpiration through the opening and closing of microscopic pores on the underside of the leaf. The apparatus which facilitates this is called the stomata.

Plants use stomata for the release of photosynthesis-generated oxygen and uptake of CO2, which drives photosynthesis - essentially acting as the ‘mouth’ of the plant. The movement of water through the plant and evaporation via the stomata is known as transpiration. Around 5% of a plant’s water intake via its roots remains in the plant for metabolism and growth, with the remaining 95% lost via transpiration (Sterling 2005, Maurel et al 2015).

The mechanism
The stomata are a seemingly simple epidermal structure consisting of two specialised cells called guard cells. These cells are connected in a specific way which allows a pore (stoma) to form between the cells. The mechanism which allows this controlled opening and closing is called turgor pressure – a type of hydrostatic pressure built up inside a cell. This pressure change in the guard cells ensures the swelling and shrinking of the cells, thus the control of the aperture of the stoma (Ma, 2010, Inoue and Kinshita 2017). Again, this mechanism of closing and opening is relatively simple, and the osmotic forces which enable it are well understood. However, it is around this part of the story that things start to get complicated to the point that there is still debate over how the plant activates these changes, with further debate over which osmolytes are driving these guard cell configuration changes.

The different states which guard cells are found in are a measure of turgidity, which refers to the distended state of the cells. Highly plastic organelles called vacuoles, membrane-bound components of the cell which can fill with water/fluid causing them to expand, essentially stretch the cell from within. When filled to the point of touching the cell wall, vacuoles drive the full opening of the stoma as the cells become turgid (figure 1). Much like an inflatable ring (tire or swimming aid) hanging on a peg, when it is deflated, the sides touch and the ring hangs from the peg almost as if it were straight. Imagine the same scenario, except the ring is inflated and now the sides are far apart, with the overall shape more circular, and a hole formed inside the ring – this is similar to how stomata open and close, but the inflation is via fluid and not air.

Figure 1 Two sets of guard cell depicted in 'open' and 'closed' state. Left hand side shows a swollen vacuole causing the guard cell to distend and create a central opening - the stoma. On the right hand side low pressure in the vacuoles results in flaccid guard cells causing the stoma to close.

Osmosis recap
Osmosis is a passive system of transport which allows the flow of water molecules from an area of high concentration to low contraction – often influenced by solutes, ions, and the concentration of other dissolved components – via a semi-permeable membrane (a barrier with pores that allow some molecules to pass through but not others) (figure 2). An example of how this works in vacuoles is through changes in pH, which cause an osmotic gradient, forcing water molecules to move through the semi-permeable membrane. 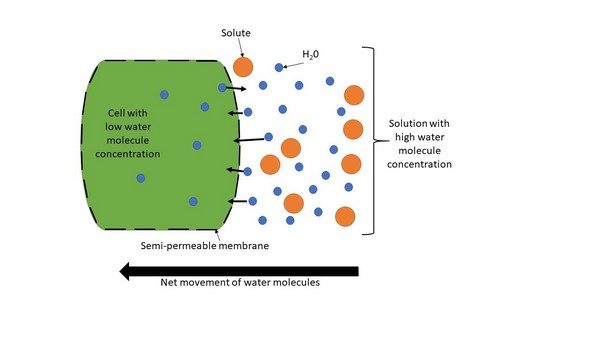 A very brief history on stomata control
The osmoregulated opening and closing of the stomata is thought to be controlled by sucrose, and potassium ions (K+), with malate2- and Chloride ions (Cl-) also playing a key role (Tallman & Zeiger 1988). Many researchers in this field theorise that sucrose is the main osmotic material causing stomatal opening, a theory which has existed for over 100 years and is still being built upon today (Kohl 1895, Outlaw 1992, von Caemmerer et al 2004, Kanget al 2007).

However, there is another viewpoint which states that K+ is the main instigator of stomatal opening. First shown by Imamura in 1943, and in follow-up work by Hsiao 1976, this potassium-driven osmosis theory was undone a little by subsequent studies which proved the amount of potassium in the guard cells was substantially lower than that found in the early works mentioned (Bowling 1987, DeSilva et al 1996).

Environmental stimulus
To complicate matters further, there are a host of environmental cues which influence the opening and closing of the stomata, including light, CO2 concentration (both intracellular and external) as well as temperature and day/night cycles (Lee et al 2008, Perez-Martin et al 2009, Ma 2010, Laanemets et al 2013).

In regard to light stimulus, it was once thought that guard cell-specific light receptors might control stomatal opening - however, despite the discover of blue light receptors, called phototropins, which control stomatal opening, it appears red and white light can also induce changes to the aperture of the stoma (Eigo and Kinoshita 2018, Santelia and Lunn 2017, Schwarz & Zeiger 1984, Lee and Bowling 1992).

Other key signalling components are implicated in stomatal conductance, and in addition to those mentioned above, Ca2+ and hormones (ABA and IAA) have an influence on stomata movement, with IAA potentially being an early initiator of stomata movement and ABA being a key hormone which also plays a major role, possibly in activation or sustaining stomatal opening (Assmann 1999, Neill et al 2002, Lawson et al 2014, Fen et al 2017, Arve et al 2018).

While the many factors influencing stomata control are far too intricate and complex to describe in greater detail in this article, it should be noted that the simplistic idea of stomata opening and closing influenced only by day and night tells merely part of the story. As is often the case in biology, there is a network of systems, all having a degree of influence on any one process, and as such an array of stimuli and signalling mechanisms, feedback loops, and cross-talk usually create a picture only the most dedicated specialists can comprehend in its entirety - yet the picture remains incomplete on most processes, in most species. For a deeper dive into the mechanisms of control for stomatal opening, readers are advised to check ‘New Aspects of Stomatal Opening Mechanism’ by Joon Sang Lee (2020), New Insights Into The Regulation Of Stomatal Movements Obtained By Metabolomics And Physiological Analyses by Valeria Freitas Lima (2018), as well as any other sources available.

Considerations for cannabis cultivation - Nutrient mismanagement and stomatal malfunction
In cannabis cultivation, the influences which should be considered include the overall nutrient levels. If the EC (CF) (a measure of ionic/salt levels) is too high, then the plant’s osmotic gradients can be affected, causing osmotic stress. As well as affecting the ability of the plant to transpire, osmotic stress can affect the control of stomatal opening and closing, which can result in overheating. This manifests in the plant as drought-like or nutrient-deprivation-like symptoms, as well as possibly mimicking external salt-stress responses (Tester and Daveport 2003, Arve et al 2011). 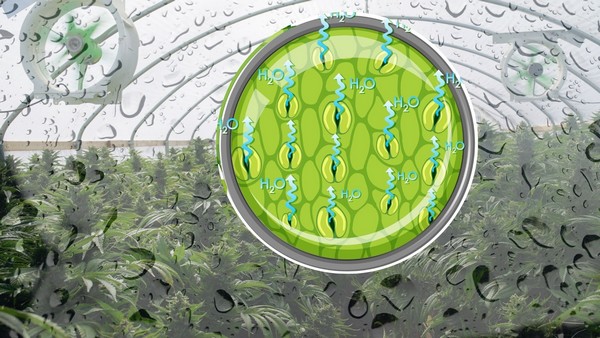 High temperature and low humidity
Environmental conditions such as extreme high temperature and very low relative humidity can increase the plant’s need for water only, invoking drought or salt-stress responses even when nutrient water is plentiful. Forcing higher transpiration rates for leaf-cooling in this way can also result in less stomata being formed, at least as is shown in the model species Arabidopsis thaliana (Crawford et al 2012).

High humidity and malformed stomata
Very high relative humidity levels can reduce water uptake from the roots and can cause failure of the plant to respond to stomatal signalling cues such as darkness and hormones (ABA for example) (Fordham et al 2001). This can cause leaf-drying and reduction in overall ABA levels affecting many other processes in the plant and may lead to the malformation of stomata (Hronkova et al 2003, Joshi et al 2006).

Many small stresses
Given the considerations above, it is worth noting that these factors can have a cumulative influence on the plant. Therefore, rather than extreme temperature, if for example the grow area temperature is just a little too high, and humidity levels are just a little too low, with the EC also a little too high, the net effect of these can be pronounced and devastating. The pH of feed water is also a major influence on the plant’s health and the osmotic potential, meaning that any combination of these parameters which fall outside target levels can negatively influence the plant’s ability to reach its full genetic potential.

It is fundamentally important to any growing facility trying out fresh cultivar lines, to know the cultivars and their optimal environmental range and limits. Most good genetic suppliers in the licensed space will provide accurate growing plans which include the environmental range limits – this should be the first step in managing potential water/osmotic stress. In addition to this, a good system for climatic monitoring in the grow area is vital in a commercial facility. The placement of these sensors must be strategic, ideally covering small areas only, and distributed over several heights. This provides a good early warning system and eventually can lead to predictive capabilities through the data log, which is advantageous for a cultivation facility and the staff working the plants.