Wingless aphids can be quite varied in appearance - from light yellow to green or pink in color and with or without three dark dorsal stripes. Its head shape is the give-away, with two horn-like projections between the antennae and a bulbed hair on the end of each. Since cannabis aphids are sometimes green without stripes, they can be mistaken for the green peach aphid, which would lead to the use of a less effective parasitoid species, Aphidius colemani. That is why correct identification is very important.

Vigilance
The tragedy is that cannabis aphids move easily into new facilities, often on imported plant material. Once inside the facility, it can be extremely difficult to eradicate them, and continued control is costly. Thus, it is advisable to quarantine and closely inspect incoming plants for these hitchhikers, and to destroy plants if aphids are found, rather than paying for crop losses and control strategies indefinitely. It is, of course, possible they can be carried in by people, and they occasionally fly in as winged aphids through vents or doors, but that is far less common. 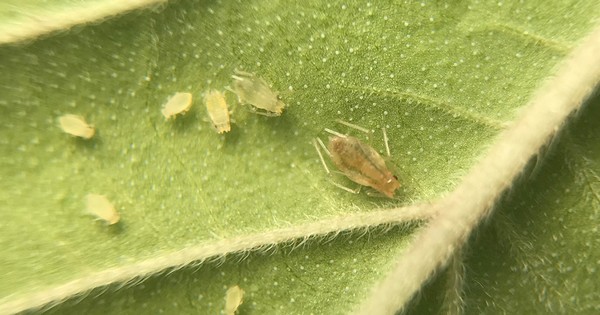 Whether cannabis aphids are known to be present or not, producers should always remain vigilant scouting for them. Yellow sticky traps will catch the winged aphids - either winged migrants or those that occur when the pest population is increasing and looking to spread to new plants. Visual inspection of the plants should include checking the undersides of leaves and stems, as they seem to prefer stems and petioles over leaves. Of course, it is also good to keep eyes open for signs of their presence, such as exuviae (white molted skins) and honeydew (sticky excretions that fall to the leaves below the colony).

How to control
Control should be approached at a facility/greenhouse level. First, identify all crops and areas that are affected and look at how they are moving through the system. Subsequent treatment must be coordinated to prevent re-infestation of cleaned areas and continue until the aphids are either eradicated or at a low level that can be maintained.

Sprays are likely to be necessary to clean up mother plants and young vegetative plants as they move into their flowering stage. However, if the strategy relies solely on sprays, the pest pressure is likely to spin out of control once spraying stops in early/mid flower. As such, it is recommended that following the clean-up sprays, a biological control program is implemented to carry the crop through flowering.

Both predators and parasitoids should be used because neither will be effective enough on its own. Chrysopa-System is an excellent aphid predator that can be applied as larvae to hotspots, or preventatively as eggs throughout the crop.

The jury is still out on the most effective parasitoid species, but Biobest cage trials have shown that Ervi-System, Matricariae-System, and Aphelinus-System perform best.

"As each facility is unique, we recommend trying different species and seeing which work best for your pest problem. Experimentation with different products and rates is often part of a successful bio-program," the BioBest team concludes.