The rapid expansion of cannabis agriculture in the Western United States provides a rare opportunity to study how an abrupt change in land‐use policy affects local biodiversity. There is broad speculation that cannabis production on private land is expanding and having negative effects on aquatic and terrestrial ecosystems, yet there exist little empirical data to evaluate this concern.

In this study, the researchers mapped and characterized outdoor cannabis production during the first season of legal adult-use production (2016) in a large legacy cannabis‐producing region of Southern Oregon, Josephine County. They descriptively compared cannabis farms to all available private parcels based on proximity to rivers/streams and undeveloped land and their overlap with carnivore richness. Using publicly available satellite imagery, they found approximately 1.34 km2 (331 acres) of cannabis cultivation within Josephine County during the first season of legal adult-use production. Most cannabis production areas were small (median size 414 m2), spatially clustered at all observed scales, and recently established (67% were not visible in 2013–2014 pre‐legalization).

When compared with all available private parcels, cannabis was preferentially located in forested areas, undeveloped land, and slightly closer to rivers. Within riparian areas, farms were slightly closer to rivers with predicted occurrence of coho salmon (Oncorhynchus kisutch). While projected carnivore richness was similar between cannabis and all private parcels, projected fisher (Pekania pennanti) occupancy was more than five times higher on cannabis farms, with a median occupancy of 0.69 (interquartile range: 0.24–0.87). The results establish a baseline for cannabis land cover at the time of early adult-use legalization and rapid expansion and can be used to predict future patterns or ecological consequences of cannabis development in other production areas. 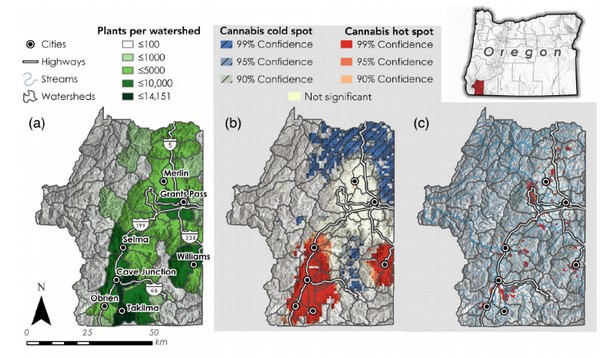 Understanding the potential ecological impact of cannabis is increasingly important as legalization expands and may also offer insights into other rural land‐use change frontiers. The expansion of cannabis farming in areas of high value for aquatic and terrestrial wildlife emphasizes the need for landscape planning. In this paper, the researchers combine satellite mapping and species richness to assess cannabis farming configuration for potential ecological consequences. We documented a dramatic increase in new farms and overlap with sensitive species distributions but overall small farm size and total cultivated area.

Read the complete article at researchgate.net.