Toi Hutchinson will join the Marijuana Policy Project as its new president and CEO. Hutchinson, a former Illinois state senator, most recently served as senior advisor to Illinois Governor J.B. Pritzker on cannabis legalization implementation. For the past year, MPP Executive Director Steven Hawkins has led both MPP and the United States Cannabis Council (USCC). Hawkins will now exclusively focus his efforts on federal cannabis reform at USCC. MPP will remain a member of USCC and continue to share staff, board members, and resources. 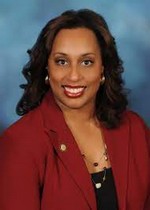 MPP as we finish our reform work state-by-state across the country,” said MPP Board Chairman Sal Pace. “Toi worked alongside MPP as one of the initial authors of the Illinois adult-use cannabis legislation to ensure that the law contained a strong social justice framework that included decriminalization in addition to legalization. MPP has always been focused not only on legalization but also on doing it right and ending the war on drugs.”

“I’m pleased to be joining the team at MPP, where I will continue my years-long effort to develop and support cannabis legalization legislation that centers on equity and repairing the harms of the past,” said Toi Hutchinson. “We are incredibly proud of the hard work and lessons learned in Illinois, standing up programs to invest in equity entrepreneurs, reinvesting in communities, and clearing hundreds of thousands of arrests and criminal records.

In addition to her position as senior advisor to Illinois Governor J.B. Pritzker, Toi also served as an Illinois state senator and an attorney at the law firm of Chapman and Cutler. She earned a bachelor’s degree in Liberal Arts and Sciences (English) from the University of Illinois and a Juris Doctor from Northern Illinois University College of Law.  Toi is a member of the Chicago Federation of Women, the Illinois Women’s Institute for Leadership, Links, International, and Alpha Kappa Alpha Sorority, Inc.