With 20,000 m2 of high-tech greenhouse space close to Faro on the Portuguese Algarve, GroVida is one of Europe’s biggest producers of medical cannabis and is able to supply GMP and GACP-accredited inflorescences (flower buds) and extracts worldwide.

As a qualified agronomist born and educated in Israel, Dror Avital, the company’s production director, has been advising medical cannabis growers around the world since 2016. He moved to Portugal just over three years ago to help set up the company GroVida. “I was involved in the design and construction of the facility, and then subsequently set up the operational side,” explains Avital. “The pandemic made it more difficult than usual to bring in contractors and turnkey companies, so to save both time and money we decided to hand-build the greenhouse ourselves.” 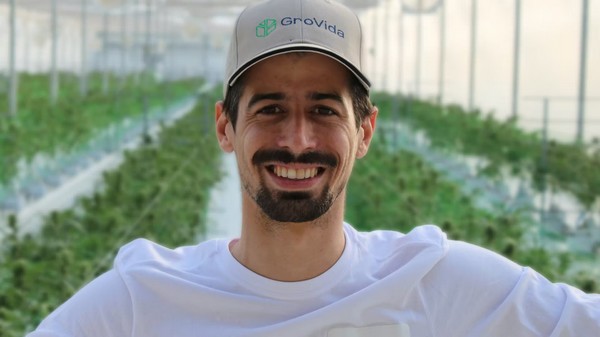 Their hard work resulted in 20,000 m2 of high-tech greenhouse space plus a 250 m2 post-harvest area for the trimming, drying, and packing operation. GroVida attained its license for the cultivation, import, and export of medical cannabis from the Portuguese Authority of Medicines and Health Products (INFARMED, I.P.) in 2020 and made its first commercial export of medical cannabis within the EU in the first half of 2021. The company currently employs around 50 people, including 36 on the cultivation team.

Avital explains that the plants move through all rooms in batches, or ‘waves’: “The 1,000 to 2,000 plants in each flowering room form one batch. They have been together from start to finish. At the end of the cycle, after around two months in the flowering room, we cut the whole batch simultaneously and clean the room ready for the next batch. This wave system is still quite an unusual approach within medical cannabis cultivation, but it enables us to minimize the risk of contamination and maintain the batch integrity.” The sanitary situation is the absolute top priority for customers of medical cannabis, he says: “It’s even more important than the potency of the product. If the medical cannabis isn’t clean enough to comply with the pharmaceutical rules, it has to be irradiated and everyone wants to avoid that if possible.”

"Thanks to being a non-organic material, Grodan’s brown wool growing media – which have been specially developed for use with medical cannabis plants – have helped us to improve the sanitary level and microbial counts," he continues. “We used to have to irradiate 70% of our batches, but it’s now down to only 20% and hopefully we’ll achieve zero eventually. I also like the fact that the substrate material doesn’t fall into gutters and clog up the drainage as soil or coco would. Besides that, tiny fungus gnats love wet soil, and – as vectors for spreading disease – they can be a real problem in any nursery. Since we started using Grodan’s brown wool blocks instead of coco in January 2021, we don’t really need sticky traps anymore.”

According to Avital, GroVida is one of the first medical cannabis growers in Portugal to switch from coco to stone wool for the cultivation stage. “Despite the benefits of stone wool, irrigation can be super tricky. If you don’t know what you’re doing, you can seriously stress the plants and end up having to destroy the whole room – which can be a hugely expensive mistake in terms of lost revenue. That’s why I’ve been using Grodan’s GroSens sensors since March 2021. I’ve found that they give me a level of control and data collection that I couldn’t have with any other substrate,” he explains. “It takes just a few minutes to print out the daily irrigation reports and all the information about the water content and EC is there at your fingertips as the basis for decision-making. In fact, the ability to use accurate sensors is the biggest benefit of stone wool over coco, in my opinion.”

“I’m so pleased with the results and the service I receive from Grodan that I’m actively encouraging other medical cannabis growers I know in Israel and elsewhere to switch to brown wool. I believe firmly in the substrate and in the GroSens system. There’s no doubt in my mind that, based on the technology available today, this is the best way to grow medical cannabis for the medical and pharmaceutical industry,” he concludes.