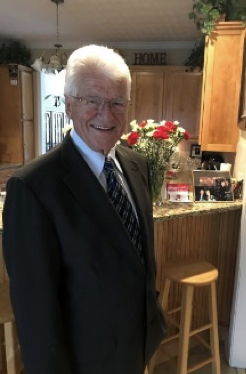 Arie Boot, age 86 passed away on February 7, 2022 after a battle with cancer. He was preceded in death by his parents, Jan and Cornelia Boot of the Netherlands.

Arie was a devout Christian and was a member of Highlands Presbyterian Church for many years where he served as an elder and taught the Dye/OFarrell Sunday school class. He served in the Royal Dutch Navy in Holland.

Arie was associated with the commercial greenhouse industry for many years in both the Netherlands and the United States as an owner and in sales.

He is survived by his wife Bobbie Boot, children John and Megan Boot of Tennessee, daughter Stephanie and Joe Cooper, Loganville, sister Leny and Kor Lopperson of Holland, grandchildren Leeya and Lucas Boot, Zack Hoffman, niece Cora and Aart Van Wijmgaarden, Nephew Bert Jan and Mingion Lopperson of Holland and many other relatives and friends.

Arie loved hosting any type of celebration or visitation at their home in Loganville.