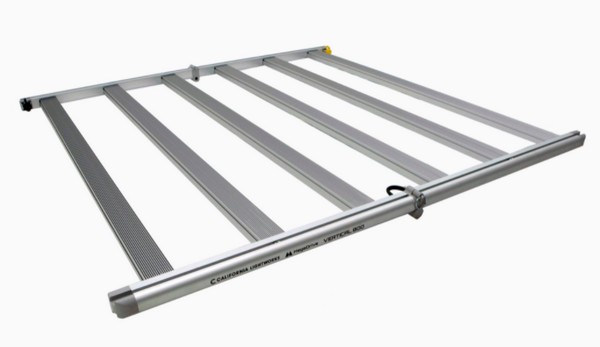 The new MegaDrive Vertical Series reduce both upfront and operating costs, while providing increased yields, quality, and reducing heat in the grow room.

“Indoor cultivators now have access to the MegaDrive technology that has allowed greenhouse cultivators to significantly boost their yields while reducing costs and do so in a way that helps the environment,” said California Lightworks CEO George Mekhtarian. “The MegaDrive removes all power electronics from the sleek new vertical fixtures and places it in a central power supply than can be located outside of the grow room. This innovative system slashes installation costs and eliminates heat inside the vertical racks. You can say goodbye to power drops over the canopy and bulky LED drivers in fixtures that add weight and heat to the inside the racks.”

The new MegaDrive Vertical Series is designed to replace HPS lights in single-level indoor grow applications or on shelves in multi-level applications.

Additionally, the new MegaDrive Vertical Series fixtures are chainable; as many as 27 lights connect to a power unit and run from a single power drop. This makes the fixtures very thin and lightweight and can be installed at a fraction of the time and cost of existing fixtures. They also feature programmable two-channel spectrum control which allows veg, flower and finishing with the same fixture.

“Our lights have two channels so you can do veg, flower and finishing in the same rack, so you can eliminate the need for separate veg rooms, increasing efficiency,” added Mekhtarian.

These fixtures can be mounted as close as 12 inches from the canopy without light burn on the plants. The new MegaDrive Vertical Series uses passive cooling with no fans, has an IP66 rating and up to 3.5 µMoles/J efficacy. Models are available in 400-watt veg, 600-watt flower, and 800-watt flower versions.

Compared to the grow operations still outfitted with traditional high-pressure sodium (HPS) lights or earlier generation LEDs, the MegaDrive Vertical Series increases yields (both in terms of pounds per square foot and pounds per watt) and quality of the crop. The new system reduces fixture costs by up to 30% and installation costs by up to 80%. In addition, these benefits come at a 50% lower operating cost than traditional HPS lighting systems.

You can learn more about the MegaDrive Vertical Series here.