“Especially for medical cannabis, it is a problem to have variable outcomes, from one harvest to another or even in the same room. Microclimates can not only affect the yield, but also the plant’s traits, so the terpenes or cannabinoids can differ as well,” explains Mark Doherty, Senior Advisor at Dual Draft. The company’s airflow system is being used in a first-of-its-kind study on the impact of microclimates in indoor cannabis cultivation, in partnership with Edyza. “Even though we just started the comparative trial, we are already seeing a difference in consistency.” 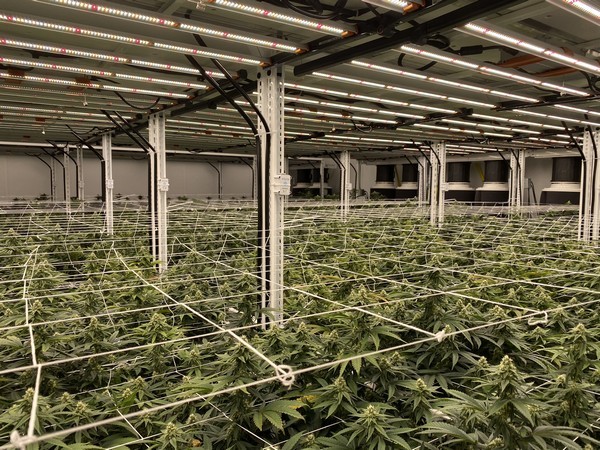 The trial
The trial consists of two rooms at The Blue Goose Flower Company, an indoor vertical farm in Sacramento, California. One flower room of 1,760 square feet of canopy will employ Dual Draft Integrated Airflow systems, along with an identical flower room using a legacy airflow system from a different provider as well as some of the grower’s homemade solutions. Each room consists of five, two-tier racks (4’ wide by 44’ long) with 1,430 plants per room.

The environmental data gathered from Edyza’s Internet of Things with High Density (IoT-HD) sensors will allow the study team to continuously record temperature, relative humidity, vapor pressure deficit, and airflow patterns in both rooms. The study will be conducted over several harvest cycles analyzing yield, quality, consistency, and plant health data. At the study’s conclusion, the results will be overlaid with the environmental data. The combined data will allow the study team to understand the impact of microclimates in a real-world setting. 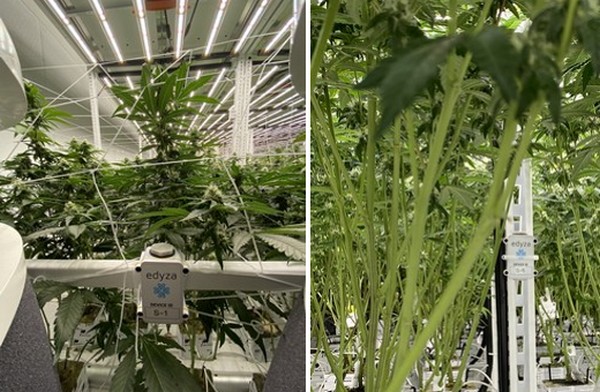 How does the Dual Draft Airflow System work?
Dual Draft’s system is unique as it has the fans integrated into the ductwork that is in the plant tray. Air is then directed through the plant tray, underneath the canopy as well as over the canopy. “The founders of the company were asked to build a vertical rack for a farm, but then realized the airflow and water drainage solutions were inadequate. . That gave them the idea to integrate the dual airflow, and make sure the tray itself is fully draining after each irrigation. Not only does the system reduce pest and disease risk, the plants do not get ‘wet feet’, while also eliminating microclimates and improving quality and yield. This is an innovation that we equate to the switch from HPS to LED lights; we believe it to be the next evolution in vertical farming,” Doherty adds.

Important data
Doherty says that they are already seeing more consistency in the room with the Dual Draft system. “In cannabis production, intentional stress of the plant is done frequently in order to get a certain effect, such as increased cannabinoids or terpenes. So the next question of our study would be: how does this more consistent environment affect the outcome of your production? Do you get an improved yield when the temperature and relative humidity stay consistent for an entire crop cycle? Once we start to understand the effects, how do we then improve the outcome without increasing operational costs?”

Overall, there is an evident lack of research on cannabis cultivation in general, especially in the US. “With cannabis not being federally legal in the US, universities have not been able to do many studies. Therefore, we have not yet seen a study like ours on the impact of microclimates on cannabis cultivation. Given the limitation of mechanical systems we are dealing with in cannabis farms, there is always going to be some variability in temperature and relative humidity. Large-scale commercial producers may not be so concerned with microclimates, as they have acres upon acres and know what the average is. Still, when the temperature and relative humidity differ in a different zone, the plant is going to grow differently, express their traits differently, and consume water and nutrients differently. Especially for medical cannabis, this can pose problems for the grower. When you are looking for a reproduction of certain terpene and cannabinoid levels, producing a different batch is problematic.”

But the study results will not just be interesting for cannabis cultivation. The team is aiming to make the study useful for cultivators everywhere, regardless of the crop type or cultivation style. “We hope to provide the Controlled Environment Agriculture market with a better understanding of indoor cultivation environments and how to maximize plant performance.”