availability of glass still a challenge

After a weekend full of wind, storm, and rain, insurance companies and greenhouse repairers talk us through the effects of the storms Eunice and Franklin. Greenhouses in the UK, Belgium, Iceland, and Netherlands were severely damaged by the storms.

Nothing you can do about it
At Voorwinden Kassenbouw, all hands have been on deck since Saturday, or rather since Friday afternoon. "We could see it coming. It's been a long time since the wind blew so hard and there's nothing we can do about it", observes Maik Voorwinden. "Friday afternoon the first calls came in, Saturday was busy. Yesterday it was sort of quiet, but as the wind picked up again yesterday, this morning the emails kept coming in and the phone kept ringing." The company is located in the Netherlands and is also active abroad.

In addition to many small damages or a few broken windows, they also received dozens of reports from companies where more than 100 windows were broken, and others with more than 1000 or even 2000 windows gone to waste. "Belgium, England, and in the Netherlands' sea provinces, as well as Agriport, Middenmeer. It's everywhere. We try to help as many companies as possible, looking where the situation is most urgent, and paused some construction projects to get everybody up and running again." 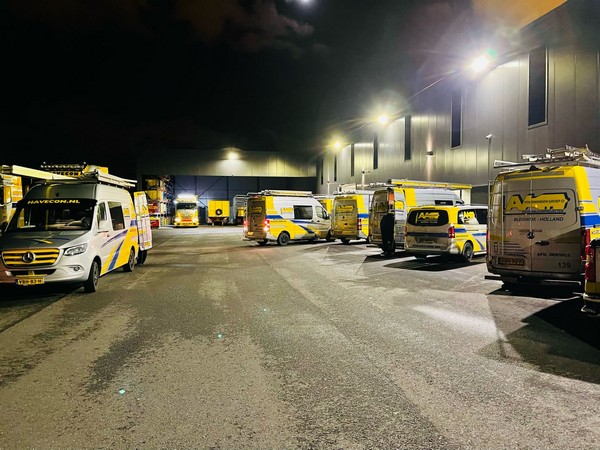 Glass stock
A bottleneck in the repairs is the availability of glass. "Fortunately, the companies with major damage also have a lot of glass in stock themselves. As a result, we can already fix many damages in the coming weeks."

That's why Voorwinden Kassenbouw advises growers to always keep enough glass in stock, relating 'enough' to the size of your greenhouse. Especially now that the delivery time of glass has increased enormously. "There is actually no standard in glass anymore," says Maik. "Growers choose a coating and a certain haze. We can get our hands on glass quickly, but it won't be the right one. For a few windows that won't be a dealbreaker, but you want to keep the crop growing uniform in the future as well."

Having your own glass stock is a safety net, Mike says. "You spend quite a bit of money on something that you may not need for ten years, so sometimes seems like a waste of money. But it will pay off in the end."

Belgium & Netherlands
As of Friday afternoon at 16.00, 1100 agricultural claims had been received by Dutch greenhouse insurance company Interpolis, including 375 from the greenhouse horticulture sector. The total damage done in Belgium is unclear, as the strong wind currently still makes it difficult to properly make an assessment, since it's impossible to fly over and make overview images. The wind also makes it extra challenging for growers with a damaged greenhouse, as maintaining the climate indoors is extra difficult. For example, the storm Franklin yesterday caused a six degrees drop in temperature.

At Belgium growers organization Boerenbond, they, therefore, hope that it will not be too cold for the affected entrepreneurs in the coming days. A spokeswoman said signs of damage are coming from Antwerp and West Flanders, among others, but that major calamities have not yet been reported. For many entrepreneurs, it remains with glass damage, and plastic caps also tore. The organization points out to entrepreneurs to properly record damage themselves within their means. This can help with claims from insurers.

Seven windows, single windows
Other greenhouse repair companies also have their hands full, although some indicate that 'it's not that bad'. Van Dorssen & Frensch, among others, reported this. In many cases, these were 'single damages', a 'small window here, a small window there'.

Apart from existing greenhouses, there were also concerns about new construction projects currently underway. Walter Bruins Slot, operations director at Bom Group, reveals that where construction is underway, nothing has been damaged. "You can imagine that greenhouses under construction are completely susceptible to wind damage." He, therefore, speaks of "good news". 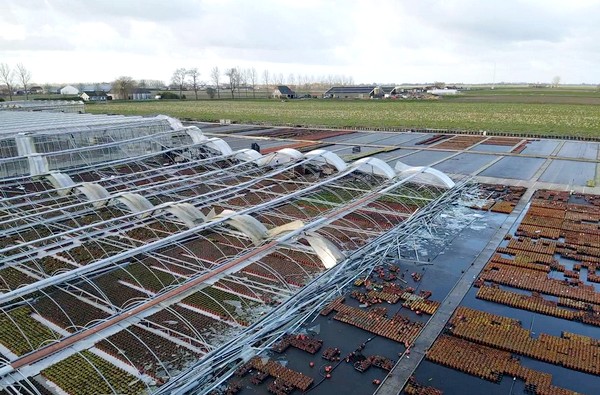 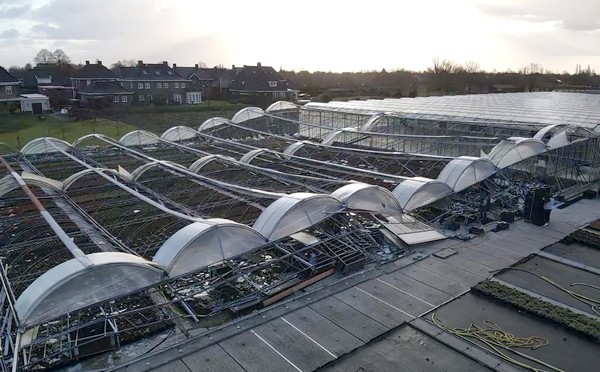 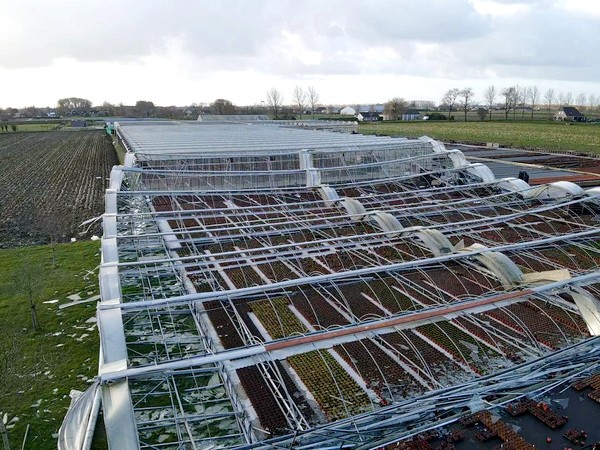 Foil greenhouses
Below is an overview of how growers experienced the storm. One of the unlucky ones was Kwekerij Johan Eveleens from Wijk en Aalburg, Netherlands who saw part of his greenhouse collapse. 'Fortunately' it concerns a foil greenhouse, so hopefully, a large part of the crop can be saved. Also Dutch growing company Fryske Strawberries experienced damage to their plastic tunnel greenhouses. The strawberry growers saw about eight tunnels blown to pieces, which they shared on Facebook.

What are the chances? Last Friday we published about a great amount of greenhouses in the Lea Valley being left empty due to the high cultivation costs, yet one of the few with plants in it was damaged because of the storm. 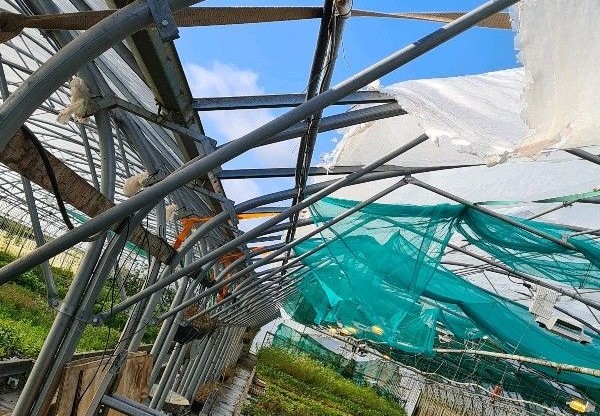 Sadness and despondency at PUURgroenten. A greenhouse foil was blown off at the company. This weekend they were working with all their might to save what could be saved. The growers have experience with storm damage. Almost exactly two years ago, the grower also suffered severe storm damage. 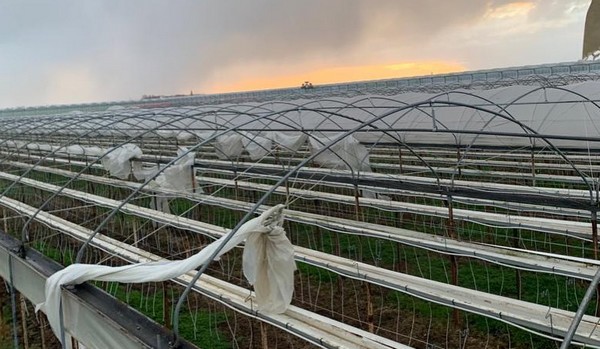 Nursery Osdorp from Amsterdam reports on Facebook that they are closed on Monday and Tuesday because of damage to the nursery caused by the storm. Inquiries reveal that it's just a few windows, but mainly damage to the roof of the shed, which was partially blown open, needs to be repaired first.

"Terryfing sound, but as long as it keeps rattling, it will do. Rattling over shattering", Dutch grower Kees van Egmond says. Later on, he reported 8 broken windows. "Very grateful." 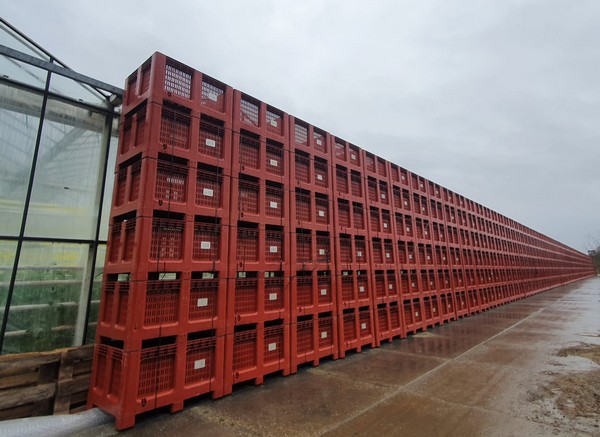 At tomato grower Westburg, they placed containers against the side of the greenhouse to give extra protection against the storm.

Repair work at numerous growers was already in full swing on Saturday. Even after Eunice, the wind continued to blow hard, and with Franklin right behind it, repairing damage is not easy.

Another late night for the Men of Weber Montage with the repair of the glass damage to the greenhouses.