Pest counts and action thresholds in the greenhouse

There are essentially three options available when scouting your greenhouse crops for insect/mite pests. 1- No scouting performed with pesticides being applied on a calendar timetable. 2- Simply scouting for pest existence with crop protection applied when presence is observed. 3- Scouting crops and making pesticide application decisions based on pest counts and action thresholds. The third option is part of an integrated pest management (IPM) approach that has been promoted throughout the green industry the past few decades.

Greenhouse pest populations are measured by trapping or direct plant inspection, and both involve determining pest numbers. Counting pests and using action thresholds requires time and knowledge, but results in less pesticide use, reduced potential for insect resistance, and can improve plant quality. It is important to remember that trapping (e.g., yellow, or blue sticky cards) improves the efficiency when scouting your greenhouse but does not replace the actual inspection of individual crop plants. This is particularly the case when scouting for aphids and mites. 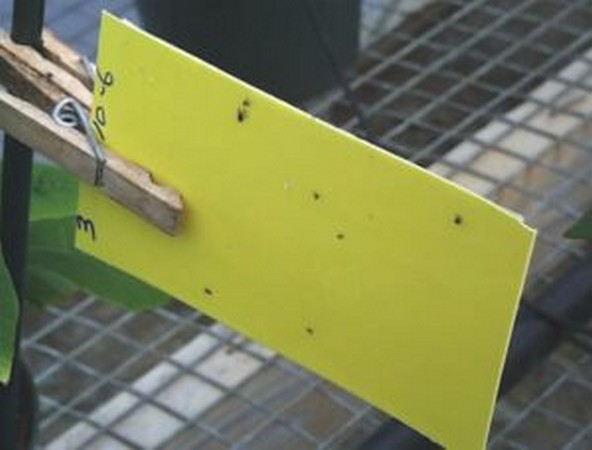 Benefits of counting pests
The scouting and counting of insects/mites help to detect when they are first present. Therefore, treatments are made before large populations build up, but not before it becomes necessary. Tracking pest numbers over time allows for the use of action thresholds, or when pest density levels threaten crop salability and economic loss. When pest densities and damage are low, it is not efficient to spend 95% of your time controlling the last 5% of the pest.

The use of biological controls (e.g., beneficial insect/mite augmentation) is most effective when applied preventatively & pest numbers are low or have not yet even been observed. When using biological controls, pest count estimates are required to determine if the beneficials are adequately maintaining low pest densities.

Finally, instead of guessing, scouting, and estimating pest counts makes it possible to evaluate the effectiveness of chemical pest control interventions after they are applied.

Using sticky cards to trap adults
One (1) sticky card is placed within each 1,000 sq. ft. area and near greenhouse vent and door openings as well as along the periphery of the house. Ideally the card should be placed at the level of the crop canopy or slightly below to effectively trap many of the major adult pests found in the greenhouse. Each of the sticky cards should be examined at least once per week. Using stakes and wooden clothespins to support the traps & sticking them into the media is an effective approach. Also, be certain to number and date each trap card to a specific location. When pest counts are low it is acceptable to reuse the trap card for additional weeks.

Counts and action threshold for the primary greenhouse pests

Western flower thrips
There are no universally accepted thresholds for the western flower thrips (WFT) because of numerous variables that cause the threshold number to change. A general guideline to start with might be 15 thrips per yellow sticky card per week per 1000 sq. ft. This arbitrary number is only a suggested starting point, and it may often be necessary to refine your own action thresholds with experience. A single adult thrips is less than 2 mm in siz.

If releasing predatory mites for biological controls it may be necessary to begin when as few as 2 thrips/ysc/wk/1000 sq. ft. are observed. Plants that are sensitive to thrips damage such as African violet and streptocarpus crops may have a threshold of less than 10 adult thrips captured on sticky traps per week per 1000 sq. ft. Alternatively, moderately sensitive plants such as impatiens, rose, gerbera, mum, and gloxinia crops may have action thresholds ranging as high as between 18 to 30 thrips/trap/wk/1000 sq. ft. (If tospoviruses (INSV or TSSV) are present within a crop, then thrips thresholds are one (1)). A poinsettia crop has a low sensitivity to thrips damage after leaves have matured and can have an action threshold of 40 or more adults captured per trap/wk/1000 sq. ft.

When these various threshold guidelines are reached it should be a signal to begin examining individual crop plants more closely, especially those plants closest to the sticky traps. Essentially, high sticky trap counts tell you locations to look at the crop more closely. However, keep in mind that the distribution pattern of the western flower thrips in the greenhouse can be random. Therefore, the thrips could potentially be found anywhere throughout the greenhouse. Some methods to scout for thrips on plants include the following: 1- Tapping the plant (especially flowers) over a piece of white paper to dislodge the thrips. 2- Exhaling carbon dioxide on the flowers to agitate the thrips and coerce them to leave their cryptic hiding places (e.g., composite flowers). 3- Pulling back and closely examining the nectar-producing flower organs with a hand lens to detect thrips presence (e.g., new guinea impatiens).

Aphids are often found feeding on the undersides of leaves, but can also be found under flower blooms. (Photo Credit: Steven K. Rettke, Rutgers Coop. Ext.)

Aphids
It is not possible to use action thresholds to manage aphid populations. If winged aphids are found on sticky cards, then populations are usually already high. As a result, plant inspections are the only reliable way to scout for aphids. To simplify scouting efforts, attempt to group aphid-susceptible plant species together (e.g., chrysanthemum, sunflower, gazania, portulaca, pepper, calibrachoa, petunia, and others).

The distribution pattern of aphids in the greenhouse is typically spotty, with clumped populations (e.g., Melon aphids). On the other hand, Green Peach aphid species have a greater tendency to sometimes move throughout the crop & may have winged adults sooner. This behavior forces scouting to be more widespread. Look for plant symptoms such as distorted, discolored terminal tissue and for various aphid signs such as honeydew, sooty mold, cast skins and the actual aphids themselves.

Fungus gnats
When using yellow sticky traps to capture adult fungus gnats it is most effective to place traps horizontally (flat) near the root medium. Sticky traps placed in this position typically increase catch by 50% over traps set up in the traditional vertical position at canopy level. Adult fungus gnats are weak fliers and will not be found in high numbers around the tops of crop canopies. Yellow traps should also be placed under benches if the floor is not cement.

Potato disks or wedges placed within the medium to attract fungus gnat larvae can determine density counts. The disks are typically 1 to 2 inches in diameter and are pressed ½ inch into the root medium. The wedges (French fry shape) are ½ inch square and 1.5 to 2 inches long. The disks are best used in propagation areas while the wedges are best used with more established, deeper-rooted crops. Place the disks every 100 sq. ft. in propagation areas and the wedges every 1000 sq. ft. in production areas. Count fungus gnat larvae feeding on potato 48 hours after placement in media. It has been shown that after 72 hours the potato pieces may dry-out and lose their drawing capabilities. Or worse yet, the pieces may begin to rot, promoting a breeding ground for the larvae.

Some action thresholds have been determined for fungus gnat larvae when using the potato disks. Within propagation areas as few as 3-5 larvae per disk (after 48 hours) can cause considerable damage to the small, shallow root systems. Alternatively, when using the potato wedges (i.e., French fry shape) in a 6-inch pot, it may require as many as 15-20 larvae per wedge (after 48 hours) before any meaningful root damage occurs.

Whiteflies
Although the use of yellow sticky traps can improve scouting efficiency, when scouting for whitefly it is especially important to also inspect crop foliage. It is critical to start scouting early so whitefly populations are not allowed to build up. High populations of whiteflies are one of the more difficult pests to suppress in the greenhouse. With a poinsettia crop, any previous whitefly infestations need to be under control by November. Otherwise, troubles with shipping & sales may occur before populations controls can be successfully achieved.

Like aphids, whiteflies often produce sticky honeydew with the corresponding growth of the black sooty mold fungus. If this becomes readily visible, then it is certain that high whitefly infestations (or aphids) are already present within the crop.

When using biological controls (e.g., Encarsia formosa (parasitic wasps)) it is necessary to estimate counts of whitefly scales (nymphs) within a pest management unit to determine how many beneficials to release. How to rapidly estimate the total number of whitefly scales in your greenhouse will not be discussed in this article. Nevertheless, it has been determined a release ratio of 30:1 (scale to wasp) will prevent a population build-up of whiteflies. An even smaller release ratio of 150:1 (scale to wasp) will only be required if most of the scale nymph counts are early 1st/2nd instars. When using any kind of biological control tactic, it is crucial to start releases early before high pest levels are reached.

Spider mites
Obviously, since spider mites are unable to fly during any life stage they will not be observed on sticky traps. Hence, when scouting for mites it is necessary to inspect individual plants within the crop. Looking for symptoms and signs such as leaf stippling and webbing help to indicate which plants to inspect more closely with 10x-15x magnifying hand-lens.

Some specific thresholds of two-spotted spider mites on ivy geraniums have been determined through research. It was shown that action thresholds of 7 mites per leaf are reached on plants greater than 5 weeks in production. Alternatively, action thresholds of only 2  mites per leaf are reached on plants less than 5 weeks in production. Estimated pest mite counts are required when releasing beneficial predatory mites (e.g., Phytoseiulus persimilis). Release one (1) predatory mite for every 4 to 10 two-spotted mites counted.