NL: Growers know how to find the event on energy crisis to learn and laugh

"The idea is not for everyone to start experimenting when a lot is already known." That's what climate specialist René Beerkens said during his presentation at a special grower event on the energy crisis at Tomatoworld. All available seats were packed with growers from far outside the Westland region (Flemish growers were also present), and a few even had to be turned away, with no spaces left. Attendees had the theory of data-driven, energy-efficient cultivation explained to them, as well as practical tools where possible.

The opening speech came from Miranda van den Ende of Tomatoworld. "Energy normally warms you up, but at the moment, it makes us shiver." At the event itself, however, the atmosphere was buzzing, and with a presentation by former F1 driver Robert Doornbos as a grand finale, the attending growers and a handful of suppliers went off for drinks in good spirits. 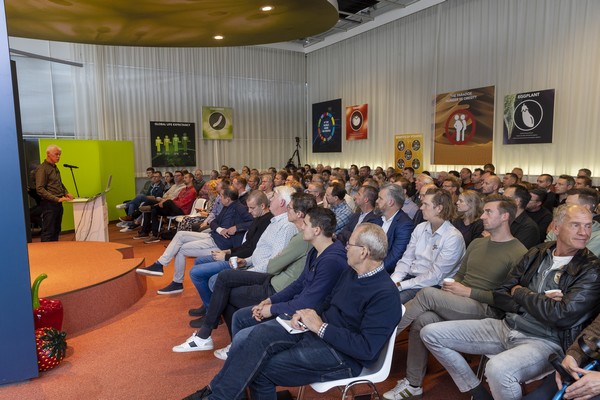 Whistling gas tap reassures
During those drinks, Miranda took the opportunity to say a few words about Ab van Marrewijk's farewell. He is quitting after 2.5 years as a grower at the horticultural demonstration center to focus on other projects.

His farewell was also briefly mentioned at the start of the afternoon, after which Ab himself was the first to speak. In it, he went back to the 1980s, to the 'first code red.' At that time, grower Ab's nerves were severely tested with -10 degrees Celsius outside and a punishing easterly wind. "Several times a night, I would get out of bed, trousers over my pajama bottoms, and pop into the greenhouse to see if everything was still working. If I then heard the gas tap still whistling away, it gave me some peace of mind again."

Ab managed to bridge the gap directly to cultivation practice with a few more anecdotes. For instance, a story about drinking a crate of beer with friends and then filling the empty bottles halfway with water to use them creatively to keep an eye on the temperature in the greenhouse.

'Three crucial sensors'
The following speakers did the same. Mark van der Werf and René addressed the theory behind Plant Empowerment. In doing so, at the request of Robert Solleveld of Glastuinbouw Nederland, they skipped quite a few pages in their presentation to go straight to the conclusions. Using a series of (attention-grabbing) points, a lot of practical tips were shared with the audience.

Getting good data was one of those tips. René discussed what he called "three crucial sensors" for growers: a measuring box above the screen, a pyrgeometer, and an RH sensor on the outside of the greenhouse. Attendees were asked to indicate by raising their hands whether they already owned a sensor like this. More than half had a measuring box, and coupling for climate control was less common. A pyrgeometer is also fairly well established, at least much more so than five years ago, Mark pointed out. One of the growers in the room indicated that thanks to this sensor, he has started to screen an estimated 20% more thanks to insights on radiation.

The third sensor is the RH sensor outside on a meteorological mast. This sensor gives the grower a number to steer by instead of, as René outlined, now often in practice, 'looking at the sky' (a lovely blue) and at the wind direction (high northerly winds) is used to determine whether to keep the windows closed. 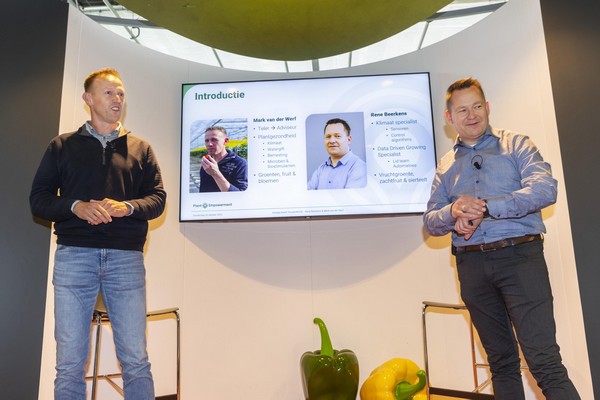 Plan based on light
Another important piece of advice to growers is to make a plan based on light. Mark explained that it is quite possible to plan ahead for the whole year and then just fine-tune on the day itself. It is important to find a 24-hour temperature for the amount of light.

Especially now that the lights are being left off or used less this winter, gaps can appear in the light input. The grower has to act on that. If it is up to Plant Empowerment proponents, growers will soon no longer talk about 'what 24-hour temperature they had' but about the speed they made. The DLI, Daily Light Integral or light sum, is important for that. Furthermore, instead of talking about joules, growers should talk more about the mole/PAR ratio.

Halfway through the program, there was a short break and, afterward, more extensive drinks. Photo: Joyce van Dalen (Tomatoworld)

Economical ventilation
The screen then displayed an image of an annual plot of net radiation data, shown in red and blue. This provided a funnel-shaped image from a project with Het Nieuwe Telen (The New Way of Growing) at Vereijken Nurseries. The data gives insight into whether a plant can still evaporate. A little test in between showed that few growers still screen on the radiation number. A must, according to the specialists.

With two other graphs, René showed that ventilating 4% less can yield big energy savings. The climate specialist compared the strategy of the reference growers in the Autonomous Greenhouse Challenge with tomatoes with that of the winners. They ventilated 7% over six months instead of the reference growers' 11%. The term pre-night reduction also fell in this context. According to the speakers, something to be careful with because, at that moment, a lot of energy is lost, while letting the temperature drop more steadily is also possible. 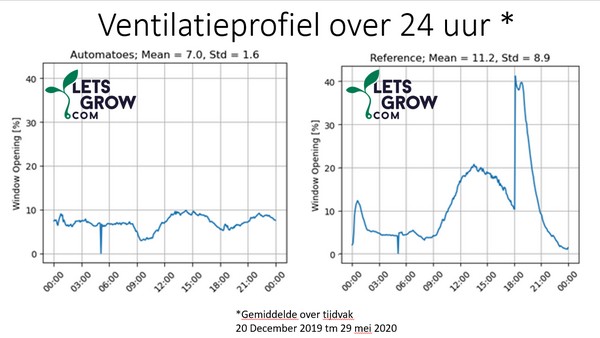 Keeping evaporation going
To keep evaporation going, air movement is something that, especially now that energy is expensive, is getting more attention. Putting a minimum tube in is one-way growers move the air, but the same can be done with a fan that is much more economical. "At Tomatoworld," René told us, "in order to grow economically, we are also currently busy looking at what can be done with getting air from above the screen and from outside."

This brings us to screens, Ton Habraken's specialism. He held a quiz with the audience and had five prizes to distribute. Pepper grower Wilbert van den Bosch of Peppers Unlimited took the top prize. He will be offered a free Energy Efficiency Analysis from all Plant Empowerment partners.

Air movement
Ton advised growers to always start with an even climate as a basis. Without that, adjustments are difficult. Another piece of advice was to stop or at least minimize air gaps. It is also recommended, according to Ton, to prevent air movement above the screen. To do this, placing ridge partitions is possible, as is closing bars every 30-50 meters. Ton pointed out to growers that 'an AC foil' alone does not work here. Air is heavy, so a sturdy foil is needed to stop air movement.

Thanks to screens, the greenhouse roof stays colder. That colder roof helps with condensation and moisture removal. Both Ton and the previous speakers also emphatically addressed input and output. In other words, what do you put into the greenhouse (or get for free), and what does it cost? It has been known for years that getting 13 liters of water out of the greenhouse costs one cubic meter of gas. You can read more about this at Kas als Energiebron. Both condensation and the removal of moisture from the greenhouse require energy. The better the moisture balance, the less energy it costs. Now that growers are growing more economically and old ways of tackling this problem have become very expensive, new ways are needed. The screen specialist advised the room to definitely install an RH and temperature sensor above the screen cloth.

Role of forehead in lighting choice
The last horticultural technology speaker before former F1 driver Doornbos took the floor was Sander Hogewoning of Plant Lighting. This time, he focused on energy in lighting, as well as the reason why more and more growers are switching from HPS to (full) LED lighting. His basic tip in that regard to growers: choose a fixture that is efficient, with maximum micromoles per watt.

One of the points he dwelled on was radiant heat. It is often heard that growers are (or fear) missing that heat when switching to LED. Now LED is certainly not 'cold light' as Sander showed, but near-infrared radiation is indeed not provided by an LED fixture. A grower standing under his HPS lights feels that well, as he can feel the heat from the light on his forehead. But the question is whether the same is true for all plants. Sander showed that this is more nuanced. 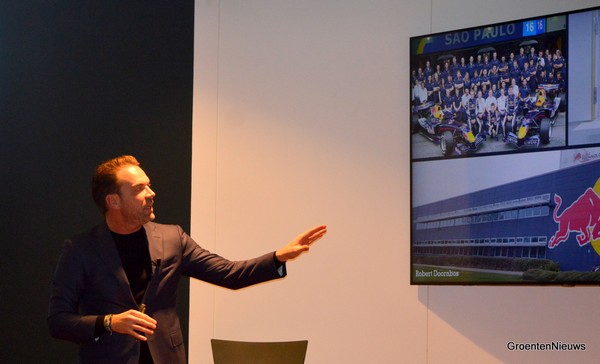 Robert Doornbos, without very consciously mentioning it, drew the comparison between Formula 1 and data-driven growing. His presentation remained light-hearted, including clips on what G-forces do to a person (more than many people think, so car drivers really are trained athletes).

Answers
Rules of thumb, such as '100 joules per bunch of tomatoes at a stem density of 2.5', no longer apply when switching, Sander further showed. He also pointed out that the commonly used light-to-temperature ratio (RTR) drops sharply in reliability. Which light fixture to choose is a question Sander sometimes gets during presentations. On Thursday afternoon, to his great satisfaction, this did not happen. Instead, the lighting specialist advocates looking closely at what the plant needs and what a light fixture can do. Sometimes this is difficult because, according to Sander, very little is still known about exactly when a crop can or cannot evaporate.

An answer to this question would help the sector a lot, but as it is, it is not clear that this answer will arrive (very) soon. With all the other tips and advice offered, however, growers can move forward again. Not to mention the experiences, tips, and knowledge exchanged during the drinks between growers and suppliers. It would be good if, even when the crisis hopefully recedes, such sessions with many growers continue to take place more often.