What are the impacts of different light spectra on CBD, CBDA and terpene concentrations?

Besides biotic and abiotic stress factors, secondary metabolism can be manipulated by changing light quality and intensity. Therefore, a recent study by the University of Hohenheim and the University of Helsinki aimed to establish the impact of different light spectra on CBD, CBDA and terpene concentrations. In order to do so, three morphologically different cannabis strains were grown in a greenhouse experiment under three different light spectra with three real light repetitions.

"The results of the study indicated that the considered light spectra signiﬁcantly inﬂuenced CBDA and terpene concentrations in the plants. Moreover, the distributions varied between strains and indicated interactions between morphology and the chosen light spectra. Thus, the results demonstrate that secondary metabolism can be artiﬁcially manipulated by the choice of light spectrum, illuminant and intensity."

The experiment
The greenhouse experiment was carried out at the University of Hohenheim in 2021. The phytocannabinoid-rich cannabis strains A4, Kanada and E19 were grown under three light sources: two LEDs, namely, a Solray385 and an AP67, and one ceramic metal-halide lamp, a CHD Agro 400. 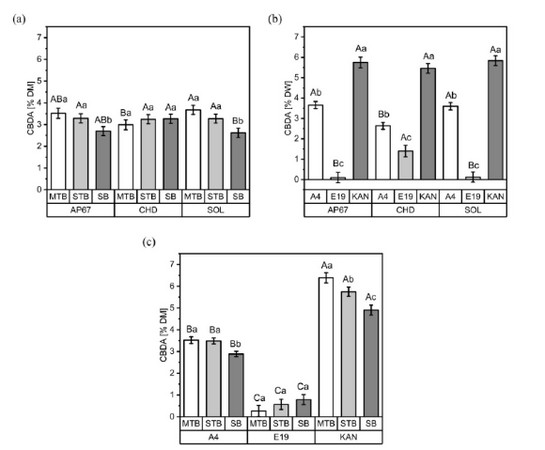 Terpenes
The core terpenes present in nearly all cannabis strains are the monoterpenes β-myrcene, α-pinene and limonene, and the sesquiterpenes caryophyllene and α-humulene. The terpene profiles showed clear differences between strains, with A4 being dominated by α-pinene and additional higher concentrations of β-pinene and β-myrcene, whereas E19 was characterized by linalool, caryophyllene and β-pinene. The strain KAN showed a more homogeneous distribution, with higher concentrations of ocimene and β-myrcene. Additionally, the terpenes exhibited signiﬁcant two-way interactions between light, strain and ﬂower position. 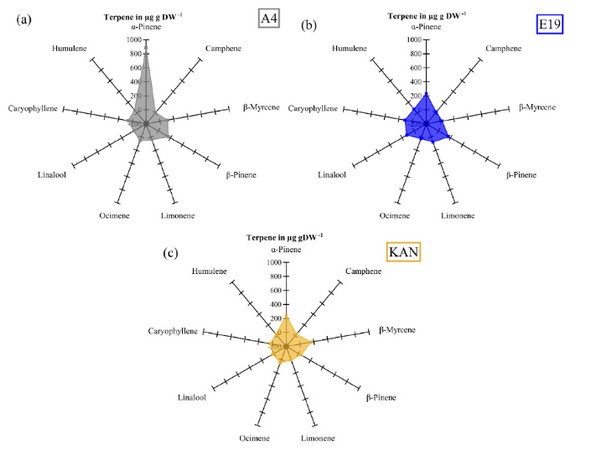 Signiﬁcant interactions between light spectra and strains were found for the terpenes α-pinene, humulene, caryophyllene and linalool. The strain A4 showed a considerably higher concentration of α-pinene than the other two strains under all light spectra. Comparing light spectra, concentrations of α-pinene increased signiﬁcantly under CHD
(323.02 µg g DW−1) compared to the two LED lights, AP67 (90.85
µg g DW−1) and SOL (85.54 µg g DW−1), for the strain E19.

In addition to the correlations between terpenes, this study revealed different compositions of terpenes and CBDA in the individual ﬂower positions. Terpene synthesis can change due to external factors, such as light, temperature and abiotic and biotic stress.The strain A4 is characterized by an elongated growth, in which the MTB and STBs especially are not shaded, in contrast to the SBs, which grow close to the main stem and are therefore shaded by the main leaves. In this perspective, the secondary metabolites should be concentrated in the STBs and MTB. This trend was evident for CBDA and even more clearly expressed for terpenes. Here, signiﬁcant differences between the STBs and MTBs compared to the SBs could be seen, especially for β-myrcene, limonene and ocimene. The strain KAN showed the shortest and most compact growth habit, resulting in a strong
shading of SBs. The researchers recommend various pruning and defoliation techniques to enhance light-use efficiency, modify plant morphology and expose flower organs more fully to higher illumination levels.

To read the complete study, go to www.researchgate.net