What’s the difference between F1 hybrids and the traditional cannabis strains?

The vast majority of cannabis seeds available are marketed as hybrids. But not all hybrids are the same. Most of the cannabis seeds available at seed banks and dispensaries are called strains, meaning they are the progeny of two non-fixed parents. "While many of them offer good results, they lack the uniformity and productivity of true F1 hybrids. These varieties are new to the cannabis industry, and they're poised to become the mainstay among growers in the coming years," according to F1 SeedTech's blog post. 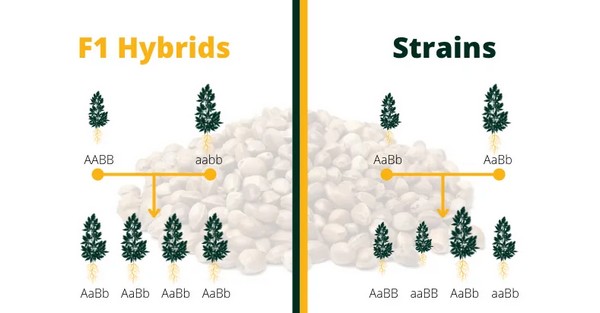 After developing two solid inbred lines that are fixed on certain characteristics, breeders then cross one parent from each line. Pairing two genetically distinct cultivars revert inbreeding depression and lead to a phenomenon known as heterosis in the F1 hybrid progeny.

Most strains available produce populations with varying traits, from size to yield. To refine these genetics, breeders must continue to develop F2, F3, F4 generations, and so on, until they develop populations with less phenotypic variation.

F1 hybrids vs. strains: Performance differences
Now that you're aware of the basic differences between an F1 hybrid and strain seeds, we're going to look at their key differences in breeding techniques, yield, disease resistance, and availability.

Yield
How do F1 hybrids perform against strains when it comes to yield?

Disease resistance
Do F1 hybrids have an edge when it comes to defending against pathogens?

Uniformity
Why seed type scores highest when it comes to uniformity?

Which seed type is superior for commercial growing?
"F1 hybrid seeds are the mainstay of modern agriculture. Every time you step into a supermarket, you'll notice striking uniformity between each type of tomato, pepper, and corn. These are all from F1 plants. Not only were they more efficient, but the farmers that grew them dealt with fewer pests and diseases and profited from higher yields. Innovative companies have only just made F1 hybrids a reality in the cannabis world. However, you can expect growers to rapidly adopt these seeds given their numerous benefits."