Margins in the cannabis industry are tighter than ever, with supply uncharacteristically high and reduced consumer demand driving prices much higher in states like California and Colorado. Current dynamics in established markets are putting heightened pressure on growers to deliver the most marketable, consistent, and high-quality products possible— and push their plants harder than they ever have before.

Deploying lighting strategies that maximize cannabis' ability to absorb light is critical to optimizing yields and results but can cause photobleaching when taken too far. While photobleaching doesn't necessarily impact yields, terpene chemistry, or potency, it drastically reduces consumer marketability, which is more important than ever in hypercompetitive, saturated cannabis markets, explains Dr. David Hawley, Lead Scientist at Fluence. 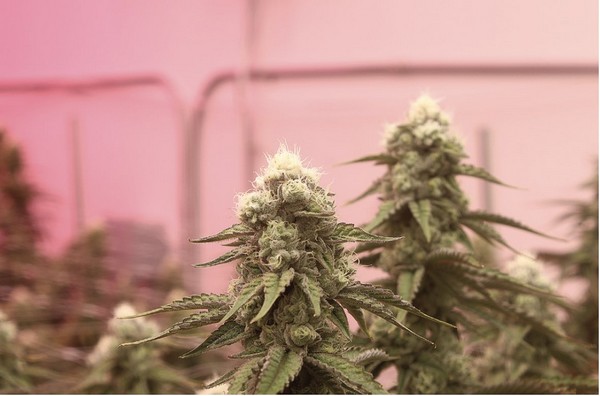 What is photobleaching?
Physiologically, photobleaching is the destruction of chlorophyll. When this pigment is destroyed, tissues are left with an off-white "bleached" appearance. Photobleaching is predominantly induced by applying too much of the wrong light to plants during flower development. When this happens, the plant loses its ability to correctly process the incoming light energy, disrupting systems inside the plant and destroying chlorophyll.

Chlorophyll—along with helper pigments carotenoids and xanthophylls—are the pigments in plants responsible for capturing light energy and transforming it into biochemical energy through the process of photosynthesis. While chlorophyll is particularly good at capturing red and blue light, carotenoids and xanthophylls absorb midrange wavelengths like cyan and green. Together, these pigments make up the "antenna complex," which we can think of as the solar panel of photosynthesis.

The antenna complex is the power collector for a bigger machine called "photosystem II" (PSII). PSII funnels energy from the antenna complex to a reaction center, where the energy is used to split water molecules into their hydrogen and oxygen components, stealing some electrons in the process. Normally, these electrons are transported away from the reaction center by other proteins, and the remaining oxygen is left as a stable molecule, eventually released back into the atmosphere. This series of reactions is at the heart of plant metabolism and is what happens all the time in the world around us without issue.

When the plant's antenna complexes are exposed to high light intensities, the entire system starts working in overdrive. Like any system pushed to its limits, bottlenecks in efficiency appear, and the whole system becomes unstable. Energetic backlogs are created as electrons are pulled out of water molecules in the reaction center faster than proteins can carry them away. Now facing a surplus of electrons with nowhere to go—and with an antenna complex still absorbing high levels of light energy—the entire complex is at risk.

The combination of incoming light energy and an accumulation of free electrons is energetic enough to affect the quantum state of molecules in PSII—in a complex chain reaction, chlorophyll and oxygen molecules shift quantum states and react so strongly to each other that they're destroyed. This loss of chlorophyll molecules saps the color from plant tissues, leading to a bleached appearance.

Avoiding photobleaching
The easiest way to avoid photobleaching of cannabis buds is to use a balanced, broad white spectrum. Under a balanced spectrum, most cannabis cultivars won't exhibit photobleaching up to a photosynthetic photon flux density (PPFD) of 2,500 μmol/mˉ²/sˉ¹, well above PPFD levels where you'd traditionally see photobleaching with sub-optimal spectra.

If growers are using a more red-rich spectrum—which induces photobleaching at much lower levels—photobleaching also can be prevented by reducing total light intensity. Fluence's research has observed that reducing PPFD down to 500 μmol/mˉ²/sˉ¹ will help some cultivars remain unbleached even when the supplemental light intensity contains up to 95% red photons. This decrease in photobleaching comes strongly at the expense of final yields since the lower light intensities used aren't driving photosynthesis as hard. Fluence's research has shown that up to a PPFD of around 1800 μmol/mˉ²/sˉ¹, a 1% increase in PPFD leads to a 1% increase in final yields. The more growers have to throttle back on intensity to compensate for poorly optimized light spectrum choices, the more they'll pay when it comes time to harvest. 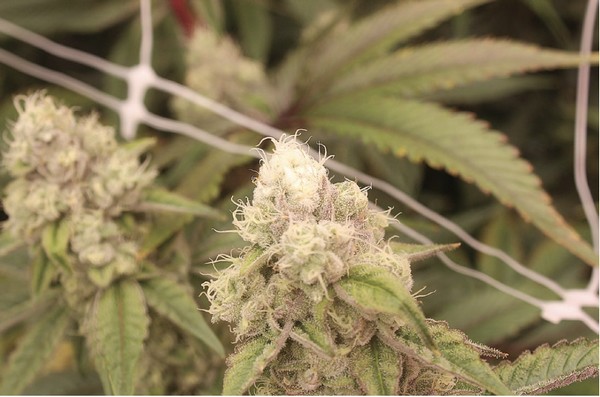 How photobleaching impacts quality
Photobleaching appears to have minimal impact on final bud yields. Though photobleaching is the destruction of fundamental photosynthetic machinery—and therefore reduces a plant's overall ability to convert atmospheric CO2 into biomass—the CO2 fixed by floral buds is likely negligible compared to the rest of the plant's photosynthetic capacity. Moreover, generative plant tissues like fruits and floral buds are considered carbon "sinks," pulling photosynthates from more photosynthetically active "source" tissues like leaves. More floral bud mass, therefore, originates from leaves than from the buds themselves.

There also is the possibility of a powerful psychosomatic effect; consumers associate certain aesthetic attributes with quality, flavor, and potency, and these visual cues may influence their consumption experience. This is extremely common among other horticultural crops—it's often said in the case of strawberries that consumers "eat with their eyes." In response, strawberry growers prioritize breeding and cultivating them to look intensely red and juicy. These aesthetic properties don't affect flavor, but consumers will perceive that visually appealing fruits taste better.

In the case of cannabis, fresh bleached buds instinctively look odd to most. When dehydrated for commercial sale, the buds will take on a dark beige-to-brown appearance, which we instinctively perceive as rotten and dead. It's highly likely that this appearance could negatively affect a consumer's consumption experience and the likelihood of purchasing.

Improving our understanding
The top priority of Fluence is to address practical production questions that affect growers today. "We're actively investigating exactly what fractions of red light and light intensities induce bleaching. Discovering which cultivars are most susceptible to photobleaching and identifying their genetic lineages will also allow us to better advise growers on optimizing their cultivar selections and lighting strategies," says Dr. David Hawley, Lead Scientist.

"Also, we're seeking to better define the relationships between photobleaching, chemical potency, and consumption experience. Though current data suggests these traits may be independent, it's too early to make a definitive conclusion— and consumer feedback suggests at least a strong correlation between these traits."