Exploring the status of cannabis in North America

Prohibition Partners has released a report on the status of the cannabis industry in North America. The first thing that the report points out is that the US is the current world’s largest cannabis market, with 33 states plus Washington DC that regulated medical use. As of now, cannabis is still in Schedule 1 of Controlled Substances, in which heroin can be found as well, on a federal level.

The biggest market
California represents the biggest market in the US, thus making this state the most important cannabis market at the moment, representing a major attractive factor for investors. It has to be noted that prohibition started 80 years ago in the US, and that pivotal was the introduction of the Farm Bill, in 2018. The bill changed the term ‘marihuana’ to exempt hemp, which is defined as ‘a cannabis sativa plant that contains less than 0.3% of tetrahydrocannabinol (THC)’. 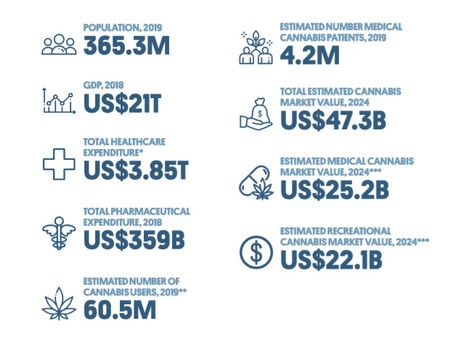 Pricing
Generally speaking, Prohibition Partners estimates the North American market will be worth around US$25.2 billion by 2024 – assuming that cannabis will be legalized throughout the US by then. When it comes to pricing, data from dispensaries showed that in 2018 cannabis cost US$11.4 per gram, on average, while in Canada it stayed at US$8. It has been suggested that the main reason behind this is down to the fact that Canada has a longer legalization history, which results in a higher number of growers and sellers than in the US. Thus, since there is a large availability of supply, the prices decrease. Another reason is to be found in the fragmented US market, which creates different micro-economic conditions that lead to a price difference between states and even between cities within the same states. Prohibition Partners notes that cannabis in San Francisco is 12% more expensive than in Seattle, and even 20% more expensive than in Los Angeles, for instance.

Canada capitalizing on advantage
In the meantime, Canada is looking to cement its leading position in the cannabis market through regulating cannabis edibles, extracts and topicals. However, it is likely that the US will challenge Canada’s leadership, especially considering the impact that new states legalizing cannabis will have.

An international perspective
On a global scale, the importance of the North American market is to be found in the influence it has on regulations in Europe, as ‘the regulatory framework across the bloc mirrors the patchwork of legalization across the US’, according to Prohibition Partners. As the market and the industry mature, ever more countries will look at the US and Canada in order to find the best way to regulate this burgeoning industry.