CannaTechnics makes its appearance at HortiContact and in the cannabis technology market:

Now that there is also increasingly more movement in the cultivation of medicinal cannabis on the European continent, a Dutch technology player is in the spotlight. CannaTechnics is the name of the company, located in De Lier, that intends to provide cannabis growers with both complete greenhouses as well as horticultural supplies for the cultivation of medicinal cannabis.

"We now want to use the knowledge that our specialists have built up in the booming cannabis market in North America, in other regions," says Tiemo Bodemann. He will become the face of CannaTechnics and in the coming days he will be manning the booth of the brand new company at the HortiContact. 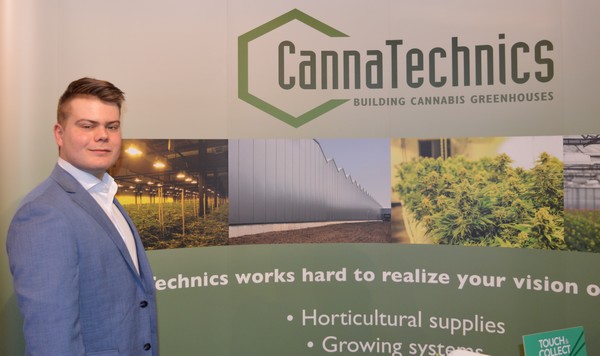 Tiemo on day 1 of the HortiContact

Specific knowledge
"There is still an awful lot going on in the medicinal cannabis market and now it is no longer just in North America," according to Tiemo, who has been closely monitoring market developments in the run-up to the launch of CannaTechnics. “We have responded to all that movement, both in the form of new regulations in new North American states and in European countries that are taking the first steps towards the legalization of the cultivation and sales, by surrounding ourselves with good partners to enter the market now."

But with what exactly? “Both with complete greenhouses tailored to the cultivation of medicinal cannabis and with horticultural supplies and parts, actually as a kind of wholesaler. Here we want to distinguish ourselves by providing extra service and, above all, the right cultivation-technical knowledge for a product. That can be a turnkey project in collaboration with partners, but also the delivery of a single component.”

What are the expectations about the development of the market and the place that CannaTechnics will occupy in five years? "In five years there will be much more medicinal cannabis cultivation in Europe," Tiemo predicts. “I think the medical world has an important role to play. If they start using more CBD oil (made from the non-psychoactive cannabinoid Cannabidiol), also more cannabis will be grown. Our role in this is to optimize the cultivation in North America, Europe and other regions with the right techniques and knowledge, hoping to build long-term relationships with growers in order to move forward together. The optimal cultivation method, because that has not yet been invented."

CannaTechnics is at HortiContact and can be found at booth A212.