Less is more in cannabis greenhouses

The green rush has seen many people jumping into the cannabis industry for the numerous profit opportunities. Being an industry still in its infancy, coming straight out of illegality, there are no commonly accepted standards. This eventually resulted in a number of growers going through hard times when it comes to optimally growing cannabis at a large scale. Some of them were willing to learn the best horticultural practices for cultivating at scale, relying on experts with a proven track record of successful operations. However, not everyone has been willing to listen to the experts’ advice.

Less is more
Darace Smith is a cannabis farm consultant who has helped many operations thrive in such a competitive sector, and he had to deal with both of the aforesaid categories. “Something that happens most of the times is that you have to educate business owners that ‘less is more’,” he points out. “I was a consultant for a cannabis operation where I, the master grower, had to explain to the owner why it didn’t make sense to fill the greenhouse at its full capacity with little to no space between each plant.” At one particular owner this even lead to an outbreak. “Fortunately, I did not allow any saying in some of the rooms of that operation,” he explains. “But that didn’t stop the carrying out of cramming the rooms with plants. I ended up suing them and won, exactly because I was able to demonstrate how I was doing my job perfectly while they were only trying to make as much money as possible.” 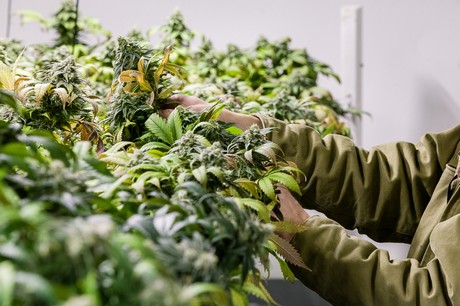 The importance of airflow
But why is the airflow so important? As Darace remarks, it is important that every plant has enough space around to ensure a proper airflow. “You need to have airflow around, otherwise plants would fight with each other, thus causing them stress.” There are many downsides for stressed plants, the most dangerous of which is providing pathogens an optimal place to thrive. “When a plant is stressed, pathogens perceive that; it works as a sort of signal for them. Therefore, the chances of the plants to be attacked and develop mold, powdery mildew and so on increase exponentially.”

He adds how at the farm where the growers chose to cram the room, he was constantly fighting mold and everything. “I was able to have them all under control, until the owner violated my contract and prevented me from working in the greenhouse. The situation became unbearable, and plants became fully infected with pathogens.”

Distant from one another
Darace further explains that, exactly how it happens with human beings, not having enough room for movement can cause particularly unpleasant feelings. Now with the spread of Coronavirus, and the call for carrying out social distancing to prevent the virus to be passed on, this situation can be better understood as the same thing happens with regards to plants and their pathogens. “Sometimes, to make people understand this concept, I tell them to stand shoulder to shoulder, close to each other, while I explain to them why it is important for plants to be distanced from each other,” he says. “I talk to them for 20 and more minutes while they are standing that way. And when I’m done with my talk and they finally step away from each other, they feel relieved. That’s when I told them that that is exactly how the plants feel. This is because, if you feel something, chances are that also your plants feel the same way.”