Plant roots not only release odours themselves, but also appear to react to odours that beneficial and harmful fungi in the soil release. They do this by actively growing towards fungi, or ignore them. This 'sense of smell' has a positive influence on the eventual health of the plant. Exposing plants to the right fungi could even offer protection against insect pests and worms that feed on plants and their roots. This is evident from Kay Moisan's PhD dissertation, that she will defend on 16 October 2020.

Plant roots are fascinating organs because they are so essential to plant health. However, we do not yet know how they interact with soil microbes and which factors influence their growth. Recent studies found that roots themselves perceive odours from soil microbes, which in turn can affect plant growth. For instance, odours that are released by bacteria and fungi can increase the branching and the size of plant roots. Therefore, perception of these odours can significantly affect plant growth.

Growth direction
However, it is as yet surprisingly unknown whether microbial odours can also affect the direction in which plant roots grow. In her dissertation and the accompanying publication in Plant, Cell and Environment, Kay Moisan and her co-authors from the Netherlands Institute for Ecology (NIOO-KNAW) and the laboratory of Entomology of Wageningen University & Research (WUR) demonstrate that this is the case. It appears that plants perceive the odours produced by soil fungi and react to them before they come into contact with the fungi. 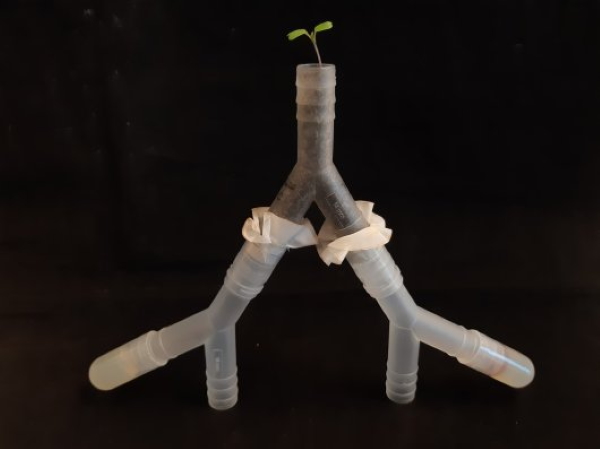 Roots were "given the choice" to grow towards or away from odours of four different soil fungi.

In the search for sustainable agricultural practices, odours from soil microbes are therefore promising candidates for plant protection and promotion. The findings also raise new follow-up questions about whether plants can actively "decide" what direction they grow and with which microorganisms they should interact, or whether it is actually the fungus that attracts roots for its own benefit.

New research method
Moreover, the design of the research is a proof-of-concept that roots do respond to microbial odours. "The research has provided a new method for studying the chemical interaction between roots and soil fungi, and its influence on root growth. This innovative setup can also be used by other laboratories to further investigate these interactions," says Moisan's promoter Prof. Marcel Dicke.