Israeli genetic seeds company CanBreed purchased a 3.5-acre farm in  San Diego county in California. In the farm, CanBreed plans to set up facilities to produce stable hemp seeds for marketing in the US. The farm's initial output is expected to be about 12.5 million seeds annually, which will subsequently increase to about 50 million seeds annually.

"CanBreed, which was founded in 2017, develops genetically improved and stable seeds, and is the first, and possibly the only, Cannabis company in the world to commercially license the patented CRISPR gene editing technology," CanBreed team explains. "CRISPR is the most advanced New Breeding Technology (NBT), which serves the agro-tech industry in enhancing agricultural crops. Just recently, the two scientists that developed the CRISPR technology received the 2020 Nobel Prize in Chemistry for this discovery. CRISPR technology enables the precise cutting of the DNA of a plant in order to silence or to activate genes, and is considered as non GMO. Consequently, the technology has a vast potential in the fields of medicine and agriculture. CanBreed applies CRISPR technology on a range of agricultural crops (vegetables and field crops) and this includes medical and industrial cannabis." 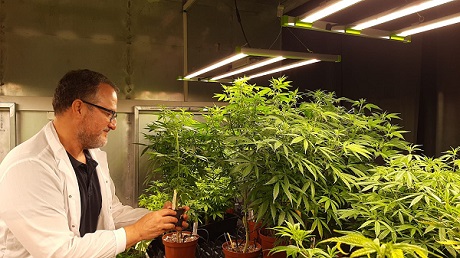 The target markets that CanBreed is aiming at have an estimated value of billions of dollars and will bring about a solution for many needs, such as adapting the structure of the plant for mechanized harvesting, increasing its protein content and adapting its cultivation to changing climates. In the case of the cannabis market, the company is offering solutions for all market segments: from medical cannabis through to industrial cannabis (Hemp), including cannabis strains with a specific chemical profile suitable for the pharmaceutical industry.

"One of the main problems in cultivating cannabis is the lack of stability in the raw materials," they say. "CanBreed will complete the development of the world's first fully stable seeds (the company's beta product) by the end of 2020. This month CanBreed announced that as part of its research in developing a resistance to powdery mildew (a plant disease caused by fungi that can destroy cannabis crops), it has succeeded in implementing and identifying gene editing of the cannabis plant by using CRISPR technology. This success by CanBreed represents a breakthrough in the field and has been achieved after more than three years of research. This is the first time that there has been a successful attempt by a company to edit the cannabis plant while using the innovative CRISPR gene editing technology."

CanBreed is expected to set up a facility and greenhouses in its new farm to produce stable hemp seeds for the US market. The construction work is scheduled to begin early 2021, so that by the end of 2021 CanBreed will start selling the stable hemp seeds.

The hemp seed market in the US is enormous with about 500,000 acres of hemp grown throughout the country, and the size of the hemp seed market estimated at about two billion seeds annually. Hemp seeds, which are not stable and are of poor quality, are currently sold at a price of between $0.50 and $1 per each seed.

The Smart Agro Fund has invested $2 million in CanBreed. Smart Agro recently held its Initial Public Offering (IPO) on the Tel Aviv Stock Exchange (TASE), in which it raised NIS 26 million. CanBreed is the first portfolio company, which Smart Agro has selected for investment. The Chairman of the R&D Partnership is Erez Meltzer, who has major experience in the agro-tech field, and who has served, amongst other positions, as Netafim CEO. The R&D Partnership's CEO is Omri Rothman, who has 25 years of experience in the high-tech and venture capital industries, half of which was in agri-tech. Smart Agro focuses on agro-tech companies in the Israeli market, which is considered innovative in the agricultural technological sector.