Can cannabis roots be used as source of active ingredients?

The most precious end-product of a cannabis plant is of course its flowers. All the cultivation efforts are put to obtain consistently high-grade flowers, as these contain the desired compounds to manufacture medicines. Yet, the cannabis plant has always proven itself to be particularly flexible in its use. Cannabis roots too, for instance, contain health-promoting compounds that can be used as active ingredients. That is why Fabio Ferrini et al. have explored the potential of exploitation of cannabis roots grown under aeroponic cultivation. But just as cannabis research as a whole, researchers point out that “few studies have examined the composition of C. Sativa roots and their medical potential,” but they continue that what is also lacking is “alternative methods for the production of C. Sativa roots or to increase their content of biologically active molecules.” Thus, the study originated from the necessity of paying attention to an often neglected source of bioactive compounds.

Aeroponic cultivation
According to the researchers, the main compounds identified in cannabis roots are phytosterols, campesterol, stigmasterol, β-sitosterol, triterpenes, epi-friedelanol, and friedelin. To test the hypothesis, the authors have grown plants in aeroponics or in soil to understand the yield of ‘useful’ compounds. The choice of growing such plants aeroponically lies in the fact that “aeroponics promote a significantly more rapid and intense growth of both the aerial parts and root systems,” they say. Other positive characteristics of aeroponic cultivation are also the possibility to modulate the yield of bioactives “by simply varying the composition of the nutrient sprayed onto the roots by adding specific elicitors”; but on top of that, aeroponic cultivation may meet organic cultivation standards, because roots hardly get infected by pathogens, if not at all. 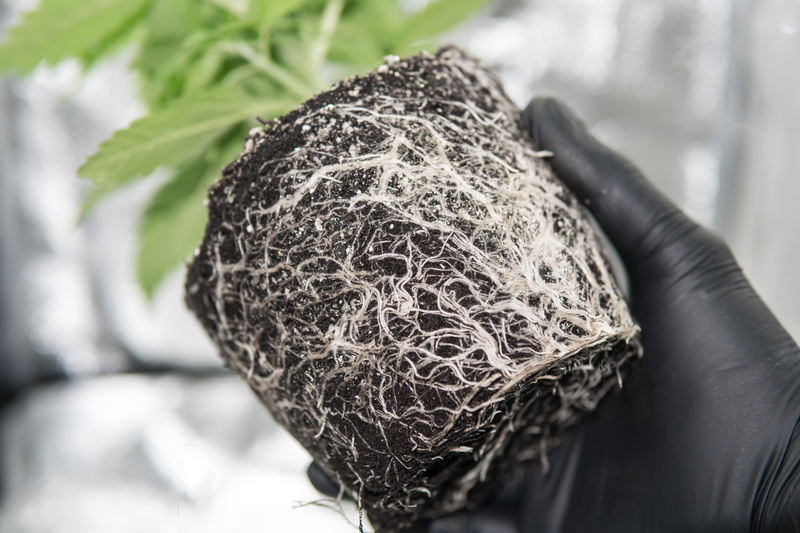 When analyzing the roots, the authors stated that “the properties of the bioactives identified in C. Sativa roots largely justify their use for the preparation of health-promoting products.” Namely, they identified that the most abundant components were phytosterol, and particularly β-sitosterol.

Paving the way for roots development
Thus, even though researchers noted that some compounds were more present in soil-grown cannabis than in aeroponic-grown cannabis and vice versa, they eventually claim that “extensive oxygen availability likely represents the most important advantage of the aeroponic culture method over conventional ones.” But also, given the easiness of steering the growth of the roots in an aeroponic system, authors say that findings can pave the way for the implementation of aeroponic cultivation based on the development of “specific elicitors to increase and optimize the yield of root bioactive constituents.”