Cannabis plants, which produce industrial hemp, medical marijuana, and cannabidiol (CBD) oil, among other products, have an inherent ability to absorb heavy metals from the soil, making them useful for remediating contaminated sites. But this ability to soak up toxic metals may also make cannabis dangerous for consumers who ingest it. A new meta-analysis, led by researchers at Penn State, examines the ability of cannabis plants to absorb heavy metals and discusses the resulting health impacts on consumers. The team proposes a blueprint of strategies for growers to alleviate heavy-metal uptake by their crops. 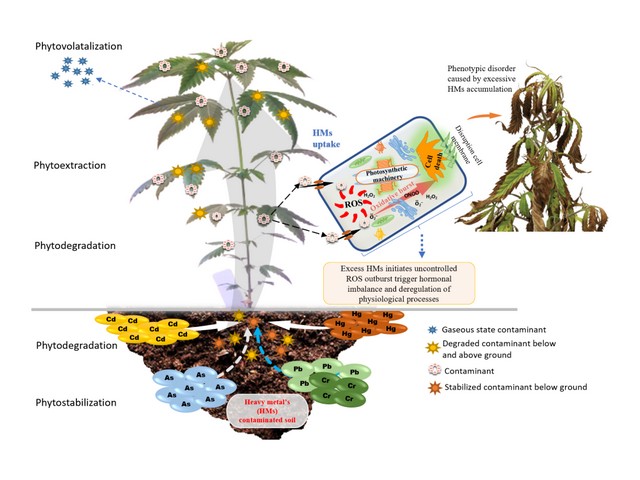 Some cannabis strains are commonly used for phytoremediation because of their unique physical characteristic. But this ability to soak up toxic metals may also make cannabis dangerous for consumers who ingest it. Credit: Penn State. All Rights Reserved.

“Heavy metals, such as lead, mercury, cadmium and chromium, are known to be carcinogenic,” said Louis Bengyella, assistant research professor of plant science, Penn State. “The heavy-metal content of cannabis is not regulated; therefore, consumers could unknowingly be exposed to these toxic metals. This is bad news for anyone who uses cannabis but is particularly problematic for cancer patients who use medical marijuana to treat nausea and pain associated with their treatments.”

Compounding the problem, Bengyella said, is the fact that some cannabis strains have been bred specifically for phytoremediation, which is the use of plants to remove pollutants from soil, water or air.

“The problem is if we use these strains that were developed for phytoremediation without considering why they were developed in the first place, we may unknowingly expose consumers to heavy metals,” he said.

Their results were published in a recent issue of Toxin Reviews, hosted by Taylor and Francis.

The team learned that some cannabis strains are commonly used for phytoremediation because of their unique physical characteristics — including long stem length, fast growth, high root and leaf surface area, high photosynthetic activity, and dependence on relatively few nutrients for survival — which facilitate the absorption of heavy metals. The team also found that lead, cadmium, and chromium, specifically, are capable of being transported and distributed up through the stalk and into the leaves and flowers of the plant. These heavy metals then exit the plant through trichomes, which are hairlike structures located on the flowers. 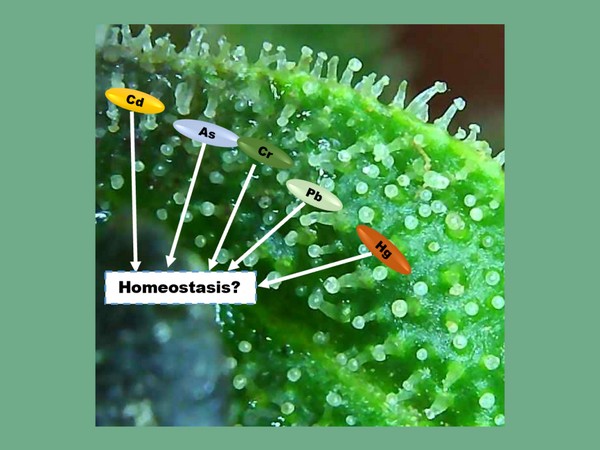 Heavy metals exit cannabis plants through trichomes, which are hairlike structures located on the flowers. Trichomes are important because they store the CBD oil and the tetrahydrocannabinol (THC) that are desired by consumers. Credit: Penn State. All Rights Reserved.

“Trichomes are important because they store the CBD oil and the tetrahydrocannabinol (THC) that are desired by consumers,” said Bengyella. “This led us to question if these heavy metals are there at the level of the trichome, what can they do to people?”

Next, the researchers investigated the documented health effects of heavy metals. They found that heavy metal contamination in cannabis can cause various health problems due to the fact that the heavy metals are rarely metabolized, and therefore, accumulate in specific areas of the human body. The most common mechanism of heavy metal toxicity in the human body is via the production of reactive oxygen species and free radicals, which can damage enzymes, proteins, lipids and nucleic acids, and cause cancer and neurological issues.

“Cannabis consumed in combustive form represents the greatest danger to human health, as analysis of heavy metals in the smoke of cannabis revealed the presence of selenium, mercury, cadmium, lead, chromium, nickel and arsenic,” said Bengyella. “It is disturbing to realize that the cannabis products being used by consumers, especially cancer patients, may be causing unnecessary harm to their bodies.”

The authors conclude that the application of agricultural best practices, such as choosing cannabis varieties that were not bred to better absorb heavy metals and choosing farmland that is free of heavy metals, can mitigate heavy metal contamination. Specifically, the team offers three recommendations to growers for choosing farmland: avoid abandoned industrial sites, perform air quality analyses before establishing a farm and conduct a soil pH test because pH can impact the quantity of heavy metals a plant absorbs.

“The problem is at the level of the consumer who uses cannabis products, but the solution must come at the agricultural level,” said Bengyella. “We believe that is where we should hammer hard and solve the problem.”

Bengyella is currently leading and teaching the cannabis production course (Plant 240) in the Department of Plant Science.

Click here for more info on the PSU EDU.