The American team Koala has been declared winner of the third edition of the Autonomous Greenhouse Challenge at Wageningen University & Research (WUR) in Bleiswijk. In this third edition of the competition, five international teams from around the world have produced a lettuce crop using a fully autonomous algorithm. With the lowest feasible input of resources such as energy and CO2 and the production of a maximum of good quality heads of lettuce, they have optimized the net profit.

More than lettuce
An ornamental grower, an innovation manager, a fruit grower, and numerous greenhouse builders: anyone who thought the final event of the third Autonomous Greenhouse Challenge would only attract lettuce specialists was wrong. About eighty interested people had come to Bleiswijk last Friday to see 'Team Koala' win the lettuce growing competition. But they were even more keen to learn about the tactics of the five finalists. What did they do differently, and where did it sometimes go wrong?

These questions were finally answered last Friday. Before that, in the morning, they had been updated on autonomous cultivation in a series of presentations, and in the afternoon, they had been given a tour of projects on the WUR site.

"Due to the ever-growing world population, the demand for fresh and healthy vegetables is increasing. Autonomous greenhouses can ensure that more people are fed with vitamin- and mineral-rich products. In addition, these techniques contribute to increasing food safety and a higher production volume of healthy vegetables, using fewer resources such as energy. Its potential has been successfully demonstrated in previous editions of the Autonomous Greenhouse Challenge", the organizers of the challenge say.

Followed by two more presentations and then the announcement of the winner. Or 'winners,' as jury member Kathy Steppe put it. All five teams made it to the finals after a selection that included a hackathon, which, as Kathy pointed out, was an achievement in itself. 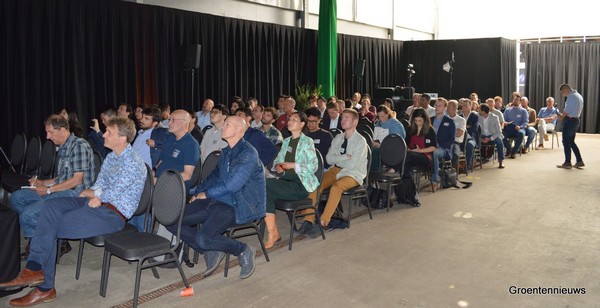 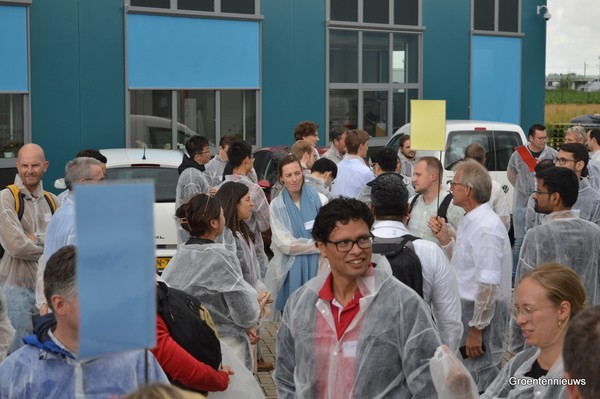 In several groups, the participants were shown around projects on the WUR site in Bleiswijk.

Koidra and Cornell
Unlike the two previous editions of the growing competition with cucumbers and tomatoes, the third edition was truly fully autonomous. With that, the teams went a step beyond data-driven growing.

Each team had a high-tech greenhouse compartment of Wageningen University & Research in Bleiswijk at its disposal to grow lettuce. The teams have created their own AI algorithms. These algorithms have fully autonomously determined the set points for temperature, amount of daylight and artificial light, heating, CO2 concentration and cultivation-related parameters such as crop density, spacing moments and day of harvest. Next to standard greenhouse sensors, the teams had access to images from a Realsense 3D camera and specific sensors provided by the sponsors Sigrow and Ridder. Some teams added own sensors to deliver input for their algorithm.

In the end, only one team could be the winner. This turned out to be the American team Koala. The team consists of startup Koidra and researchers from Cornell University. 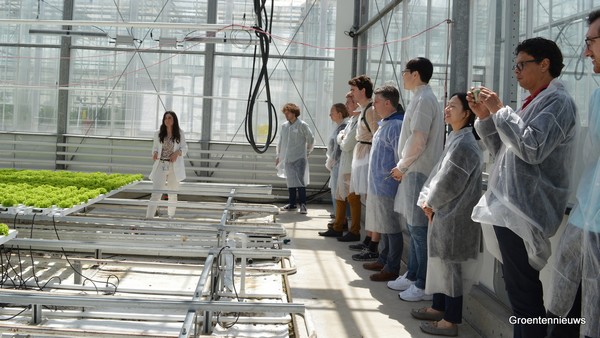 Visitors could take a look into the greenhouse compartment of the reference crop with an explanation from Anna Petropoulou of WUR.

Sensors
Each team had a high-tech greenhouse compartment at Wageningen University & Research in Bleiswijk at their disposal to grow lollo bionda lettuce of the Rijk Zwaan variety Lugano. The teams created their own AI algorithms, which were then used to fully autonomously determine the set points for temperature, amount of daylight and artificial light, heating, CO2 concentration, and crop-related parameters such as crop density, staggered timing, and day of harvest. In addition to standard sensors, the teams had access to images from a Realsense 3D camera and specific sensors supplied by event sponsors Sigrow and Ridder. Some teams added their own sensors to provide input to their algorithm.

Educational trial crop
On May 2, planting took place. The teams had to grow lettuce Lugano (RijkZwaan) with a target weight of 250 g. Quality was also assessed. If the heads were too small, had leaf tip burn, or had other deformities, they were classified as Class B with a lower price or even unsaleable Class C. If the plants were too large, the teams would have wasted resources.

Before May 2, the teams had been given the opportunity to run a trial crop in February/March. The same applied to the reference cultivation, this time not under the supervision of field growers but under the supervision of WUR researchers. Their test crop produced an algorithm against which the five finalists competed. The test crop turned out well, and the five finalists learned a lot from it before they started their own crop on May 2. 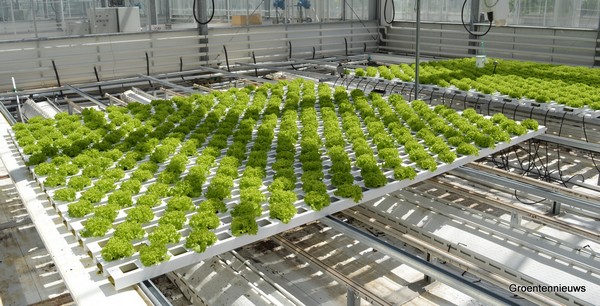 Bug fixes
The final team finished harvesting on June 17. The use of heat, electricity, and CO2, among other things, was measured during the cultivation period, and the operational costs were calculated. The fixed costs depended on the occupancy of the greenhouse space and the use of various installations, including LED lighting and screening. From these figures, the net profit was determined. The team with the highest net profit won the competition.

The teams could not access their algorithm after the start of the final cultivation on May 2 but had to request permission in case they needed to make urgent changes (bug fixes) to their algorithm. The access was charged, and the cost was deducted from the net profit. The winning team only needed access to their algorithm once to fix a bug.

Cultivation tactics
At the end of the day, it was mostly known how extreme the five teams went.

In spot five, Team Monday Lettuce finished. The judges saw that here, in the end, the lettuce grew too close together, and there may also have been too much exposure. This team's net profit was negative at -0.47 cents per square meter. Three of the five teams chose the moment to widen the gutters well, according to the jury. All the more clever because there is remarkably little data on this in theory. 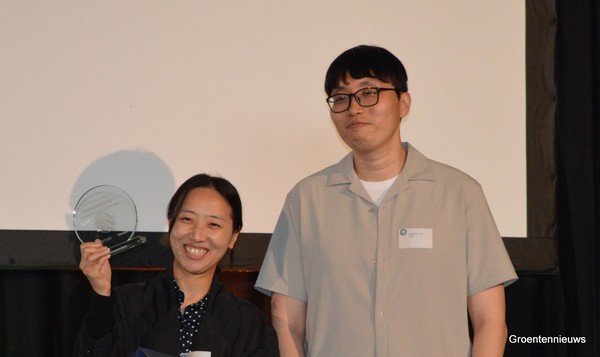 The captain of Team CVA had traveled from South Korea to attend the event.

Team CVA ended in fourth place. This team achieved a net profit of 1.47 euros per square meter and, according to the jury, cleverly used the camera data from above the crop to widen the gutters. Exposure during "expensive hours" did not work out well for this team.

Third was Team VeggieMight, with a net profit of 2.14 euros per square meter. About this team, Kathy remarked on behalf of the jury that they cleverly used their screen cloths and did not use LED lighting in their crop. 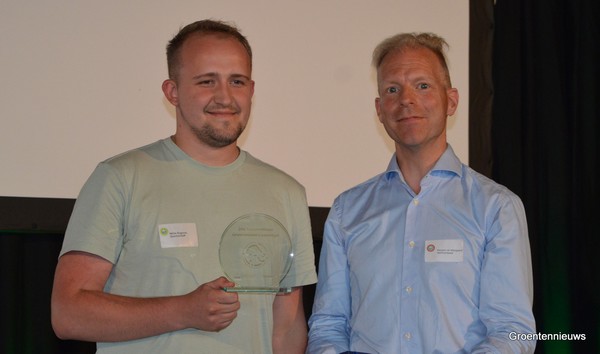 Second was Team Digital cucumbers. This team did not add any additional sensors. A net profit of 3.39 euros per square meter was realized, despite the fact that this team harvested Class B lettuce.

The winner was Team Koala. The team captain of this team, Kenneth Tran, also led his team to victory during the first edition of this growing competition. The team did not use LED lighting, quickly fixed a mistake at the beginning of their crop because they had mixed up the blackout and energy cloth, and cleverly used the crop temperature for their heating strategy. Smart screening ultimately provided this team with more light in their crop than teams that did use LED lighting. With a net profit of 5.93 euros per square meter, this team definitely stood out. 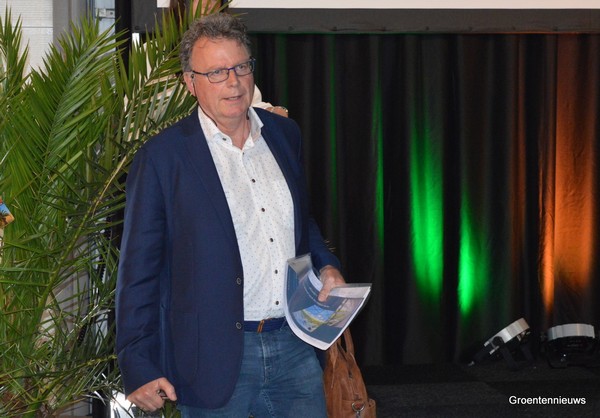 Fokke Kracht accepted the award on behalf of Team Koala.

Lessons
Anna Petropoulou of the WUR gave a disclaimer on behalf of the organization about all the figures presented. The figures cannot be compared to actual practice on a one-to-one basis. However, it became clear where energy gains had been made. Smart screens, for example, stood out. On the other hand, only the reference crops were harvested on time. All five finalists could have harvested earlier and thus saved more energy. 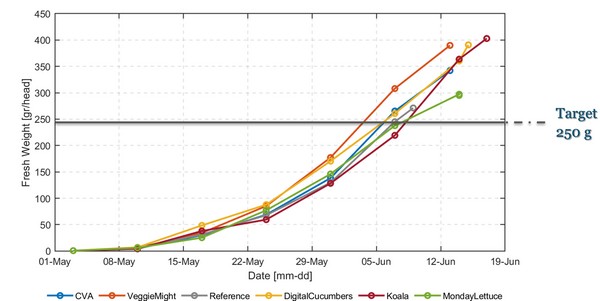 The cumulative lettuce production of five finalists and the reference. All five teams cultivated for too long without generating additional income. 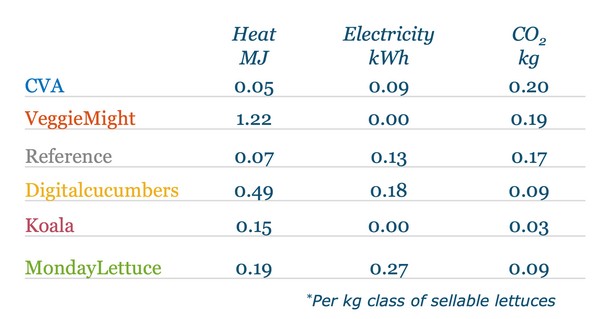 Heat, electricity, and CO2 used by the five teams.

Cost summary of the five finalists and their net profit. The reference would have been second.

Like in the earlier editions all collected data (not the algorithms) will be made publicly available later this year.