The old story about the cannabis industry goes that many basement cannabis growers struggled with the complexities of commercial cannabis cultivation, as going from small scale to large scale without proper expertise has proven to be extremely difficult. Yet, some cannabis growers were very much aware of what commercial horticulture means, and they leveraged their knowledge and experience to show what a mature cannabis industry would look like. Organic Remedies out of Pennsylvania is one of those growers.

Before Organic Remedies set up their 1.6 hectares of five flower rooms, the greenhouse was utilized for organic tomato cultivation, and it was known as Toigo Organic Farms. Subsequently, Mark Toigo, CEO and owner of the farm, teamed up with a group of early investors who saw the potential of medical cannabis, and in 2018, Organic Remedies was born. 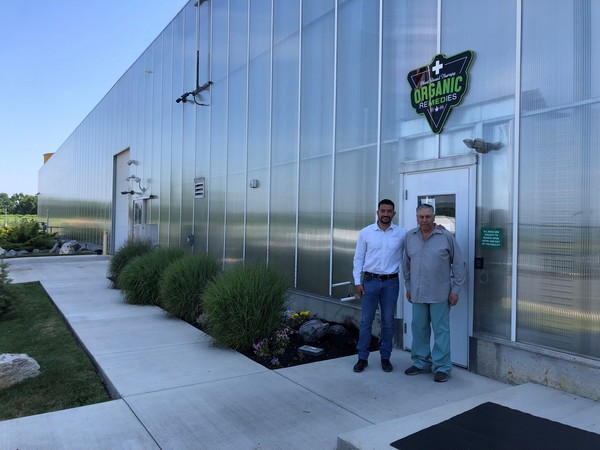 A different league
Unlike most of the early cannabis operators in the US northeast, Organic Remedies opted for a greenhouse rather than an indoor facility. Toigo Farms was an ultra-modern greenhouse with good bones. Most Canadian and California facilities opted for greenhouse operations. "I don't believe that indoor cultivation will expand or dominate in the long run," said Terry Lattimer, Director of Cultivation. "Energy costs are too high, and why wouldn't you use the free sun?"

Terry Lattimer is a horticulture veteran who has been growing for 45 years. "Our grower, Diego Perez, has also been in the industry for 25 years," he points out. "Between the owners, Diego, our team leaders, and myself, we have over 150 years of horticultural experience. This meant that prepping the greenhouse for cannabis was well planned and executed. To me, cannabis is a crop with its own peculiarities. Each crop has its unique cultivation considerations. I find it is a lot like growing poinsettias."

The greenhouse conversion started in 2020, and perpetual harvests began in the fall of 2021. Every 2 weeks, a flower room is harvested and planted. The crop cycle amounts to 2 weeks of cloning, 2 weeks in the veg room, 2 weeks of veg time in the flower room, and 7 weeks to harvest after a flip. 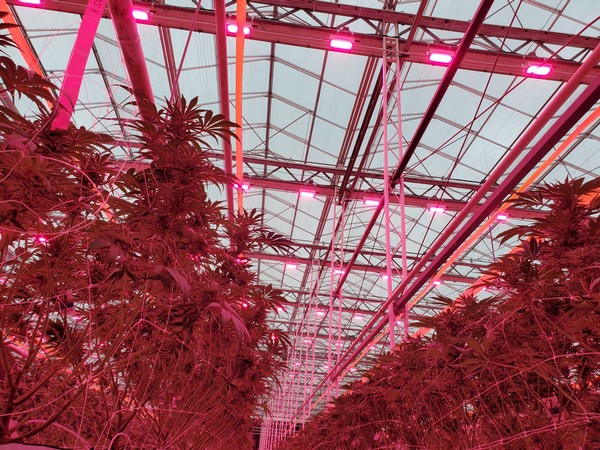 Listening to cannabis
Throughout the project, the on-site project management team worked closely with Westland Greenhouse Solutions, BOM, PB Tech, and numerous local contractors who were instrumental in meeting the grower completion dates. "We had very constructive partnerships with our team of owners, installers, and designers. We were fortunate that we started the project just before supply issues started throughout the industry."

Variations in outside conditions when operating a greenhouse for medical cannabis cultivation can be more complicated than growing indoors. Outside climates can increase pests and pathogens in a greenhouse equipped with open-air vents. "Following the principles of Plant Empowerment has aided our operations a great deal," said Terry. "We have a cultivation plan from beginning to end which mediates issues and increases quality yields. Cannabis is a very quick crop, and that is an advantage for insect and pest control."

Pioneers in water-cooled LEDs use
While many companies were going for indoor farms, Organic Remedies decided on greenhouse production, and while many were opting for HPS lights, Organic Remedies looked to Westland Greenhouse Solutions for Oreon's water-cooled LEDs. "We decided to go for LEDs because of the savings in capex and opex. We are using water-cooled 1000w LED fixtures – there are 5 lights per truss on an 8m bay times 4.5m post spacing. This configuration results in 450 umol." Terry pointed out. Installation costs are reduced as there are no C-profiles needed and, in truss mounting, with the small size of the fixtures, there is up to 5 times less shading than air-cooled LED or HPS fixtures. But, from an ROI perspective, the true selling point for Oreon LEDs is the water-cooling feature. "The efficiency and lifespan were most convincing. These water-cooled LEDs at 3.5 umol/J are 2 times as efficient as HPS, which results in 50% lower operational costs." 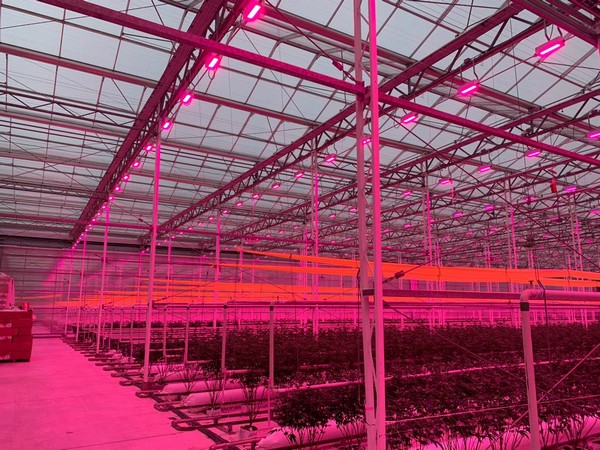 "As a grower, the biggest selling point is that Oreon's water-cooled LEDs provide better control of the temperature inside the greenhouse. The heat from the lights is removed from the greenhouse. This allows growers to keep windows closed for a longer time, resulting in higher C02 levels. "This is one of the unique things about water-cooled LEDs. Removing heat from the greenhouse is important several times in the year when blackout screens are used to prevent light pollution during the winter. We strive to be responsible neighbors in terms of light emissions."

Cooling LEDs with water coming straight from aquifer
A unique piece of this project is the method we use to cool the lights. "We are sitting on a huge aquifer here, and we use that to cool the lights." The company drilled a 600ft, 900 gpm well to get water from the aquifer to a heat exchanger. It is a limestone aquifer, the same rock formation that meets the Niagara River to create Niagara Falls. The water comes out at 12 degrees and returns to the aquifer via sediment ponds at 20 degrees. The well and heat exchanger were a much cheaper option than water chillers in both operational and installation costs.

Another key design in our greenhouse conversion was the installation of Van Dijk units to dehumidify, especially when blackout screens are used in the summer months. Nivolators also provide additional air circulation across the crop canopy. "In the future, we are looking at water cooling in the Van Dijk's, from the same aquifer source. Van Dijk can operate on heating, cooling, or on dehumidification, depending on your set points." Terry concluded.

In conclusion, the Organic Remedies team is leveraging a number of tried and true horticultural paradigms to grow cannabis by leveraging their past experiences. With the competitive nature of today's markets, under the leadership of experienced horticultural industry experts, Organic Remedies is driving down the cost of production, which it ultimately passes along to patients in Pennsylvania.