“Plant density is among the main factors affecting plant development and function. It affects micro-climate aspects in the plant shoot, including light availability/shading, humidity, and temperature. Higher plant density is therefore used to increase crop yield by increasing leaf coverage and, as a result, light interception. In other crops, increased density was reported to also have an effect on metabolism. Yet we know of no other study that evaluated the effects of plant density on secondary metabolism in medical cannabis.” Therefore, Prof. Nirit Bernstein of the Volcani Center in Israel, together with student Nadav Danziger, studied the effects of different plant densities on medical cannabis. Recently, Prof. Bernstein received the Elsohly Award from the American Chemical Society, which honors researchers at the forefront of cannabis science. “With this study, we aimed to achieve the understanding required for directing horticultural practices to increase chemical quality and standardization of medical cannabis.”

The experiment
For the study, the plants were exposed to two plant densities and four plant architecture modulation treatments, for a total of eight treatments, in a completely randomized experimental design. The four architectural treatments studied included (i) A non-treated control [Control]; (ii) Removal of all fan leaves on the plants except very small leaves at the top of branches three weeks prior to harvest (69 days after the transfer to the short photoperiod), [Defoliation]; (iii) At the beginning of the vegetative growth phase (at the time of transplanting), the top of the rooted cuttings was pruned, leaving the six bottom branches [Pruning]; (iv) Removal of the branches and leaves from the lower one-third part of the plants at the transition to the short photoperiod, 62 days post-transplanting (we named this treatment “Bottom branches and leaves removal”) [BBLR]; this treatment is also known as “Lollipopping” in the cannabis industry jargon. Plants of each architecture treatment were evaluated under two plant densities of either 1 or 2 plants/m2. The plants in each replicated plot were arranged in four rows with three plants per row, and a central plant from a central rows was used for the measurements. The remaining plants in the plot received the same treatment and served as margins. 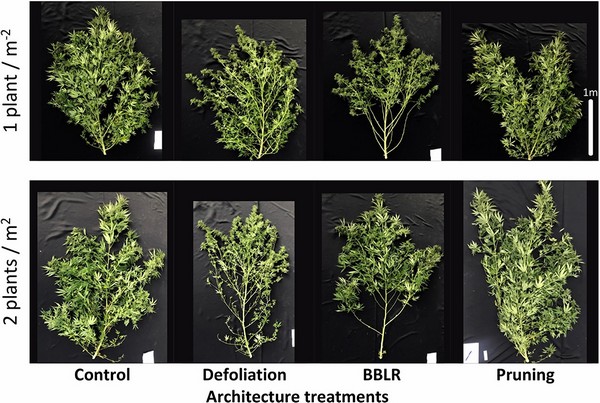 Effect on chemical profile
Cannabinoid concentrations in the highest inflorescence on the plan, which is the representative inflorescence commonly sampled for cannabinoid analysis, were overall not affected by the treatments, with only small changes induced by some treatments. Specifically, CBDA levels were higher in the closely spaced plants of the “BBLR” and “Defoliation” treatments compared with the less dense treatments; and under the high density, CBDA concentrations in these treatments were also higher than in the “Control” and “Pruning” treatments. At the lower density, THCA and CBCA levels were higher in the “Defoliation” treatment compared with all other treatments, and CBCA of the defoliation low-density treatment was higher than all other architecture treatments also under the higher density. The concentration of CBGA, the precursor of all the above-mentioned cannabinoids, was similar across all treatments except for the “Pruning” higher-density treatment, which had a lower concentration. For both THCVA and CBDVA, no significant changes between the density treatments were seen except for the “BBLR” treatment, which had higher levels in the high-density plants.

“These results can direct cannabis growers”
Overall, the results indicated cannabinoid concentrations were reduced in the lower part of the plant by the increase in plant density (except in the BBLR treatment that did not have true lower branches) but were generally unchanged (or much less affected) in the top apical inflorescence- thus highly reducing the cannabinoid uniformity across the plant. In addition, an increase in plant density decreased inflorescence yield per plant but increased yield per area (except in the pruning treatment, which was not affected significantly), thus supporting the hypotheses set for the study. “The information gained in this study can direct cannabis growers to customize cultivation practices to target the final product goals, in terms of yield quantity vs. chemical quality,” the researchers add.

To read the full study, go to www.frontiersin.com