Bob Lawrence harvested his first hemp crop last year at Yoté Farms in the Southern Oregon town of Gold Hill, about 30 miles from the California border. The 1.5-acre farm yielded roughly 4,000 pounds of hemp for CBD and CBG, two cannabinoids sought after for their assortment of therapeutic benefits.

Lawrence has been growing cannabis since 1969, but with the passage of the Hemp Farming Act in the 2018 Farm Bill, he saw an opportunity to move into the newly legal marketplace. He recruited his nephew, Nick, to launch Yoté Farms, a nod to Bob’s childhood nickname growing up in the San Diego desert where coyotes frequently prowled.

Their first harvest, though successful, was a bit of a mess, Bob said. Traditionally, hemp and cannabis are hand-trimmed, using scissors to remove leaves and stalks from the buds.

“We didn’t have any help or anything,” he said. “It was all done in-house.”

The labor-intensive challenge prompted Nick, as the farm’s head of research and development, to start looking for automated equipment that could help them process more hemp faster, and with less labor.

That led Nick to discover Mobius, one of two brands owned by the Canadian-based Eteros Technologies, manufacturing automated trimmers, buckers and mills for the rapidly maturing North American hemp and cannabis industries.

On May 13, Bob and Nick Lawrence attended the second “Demo in the Desert” event, hosted by Eteros at the company’s new U.S. headquarters in Las Vegas, to see the equipment live and in action.

The farmers came away impressed by what they saw.

“If you had a couple of automated trimmers, you could be done with your trimming and packaging in a month, instead of processing all year,” Bob said. “That’s where we’re going.”

But the main event was undoubtedly the unveiling of the Mobius M9 Sorter, the latest component of what Eteros envisions as a fully automated, interconnected, front-to-end processing line. 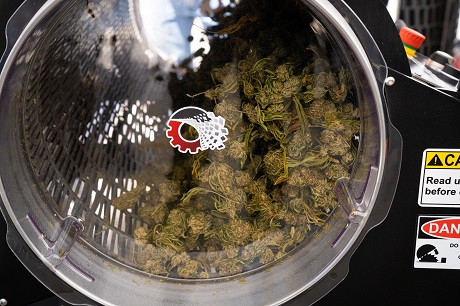 “We’re talking about an industry that is moving away from a gray market and into a legal regulated market,” said Amanda “A.J.” James, director of client relations for Eteros. “When you do that, you can get investment and you can go from growing in an area the size of this stage, to an area the size of this warehouse. To do that, you need some different equipment, and you need to get some tech in there.”

The M9 Sorter is among the first tech of its kind to hit the market for hemp and cannabis growers. Its stainless-steel construction was illuminated by an interior blue light, accentuating a futuristic element to its design. As hemp and cannabis buds are fed into the sorter’s hopper, they are carried along with one of nine plastic, noodle-like belts that gradually widen along a 78-inch line. The system effectively separates larger buds from smaller buds, allowing for a more consistent product rather than a hodgepodge of mismatched sizes and grades.

Dana Mosman, director of sales and marketing for Eteros, said the M9 Sorter can accurately grade 440 pounds of hemp and cannabis per hour, replacing the same output of 6-8 workers sorting by hand.

“To get a quality and consistent output is critical,” Mosman said. “The industry has matured, and it is more sophisticated and competitive. At commercial scales, it has to be automated for growers to be competitive.”

Mosman, who founded Triminator eight years ago in Grass Valley, California, said automation will be key to professionalizing hemp and cannabis production.

“In many other industries, automation is reducing costs on the production side and also increasing quality and consistency,” he said. “So, a lot of this equipment meets that hand-in-hand with the maturation of the cannabis and hemp industry.”

Marine pro finds harbor in hemp
Long before Aaron McKellar founded Eteros Technologies in 2016, he was building aluminum boats at a 4-acre marina along the Fraser River in British Columbia, Canada. Fifteen years ago when a friend came to him with an idea for their first automated trimmer, McKellar spent his time building the machines on the side. That venture eventually became more lucrative than the marine business, which McKellar sold to start a new company.

“There was no looking back,” he said. 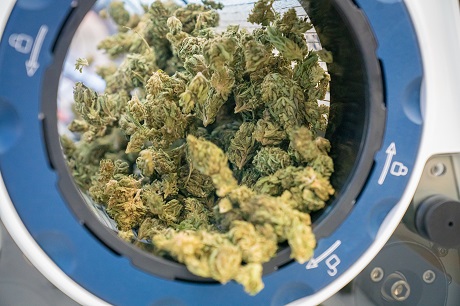 In 2016, the two friends went their separate ways, and McKellar started Eteros in Vancouver, B.C. While the company initially gained a footing in Canada’s burgeoning cannabis industry, McKellar knew 80% of his potential sales would eventually come from the U.S.

Once the 2018 Farm Bill legalized hemp as an agricultural commodity, Eteros began marketing its equipment to U.S. growers.

“I was happy to see the Farm Bill come through for hemp because that was a massive market we could now go after,” McKellar said.

Eteros opened its spacious 13,000-square-foot Las Vegas facility in February, allowing the company to exercise full control over product design and construction for Mobius and Triminator. The facility is expected to add a dozen full-time jobs right away.

“We could literally come up with an idea today, and within six months from now we could have it in production,” McKellar said. “That’s something we pride ourselves on.”

Despite product photos, videos and testimonials, McKellar said seeing is believing. The company organized its first “Demo in the Desert” at 2019’s MJBizCon. 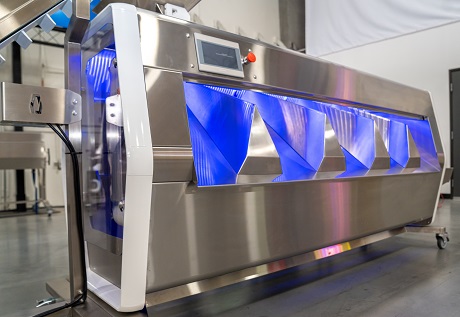 The 2021 event was the first to be held at the Las Vegas facility, where a crowd gathered for tutorials and live demonstrations. 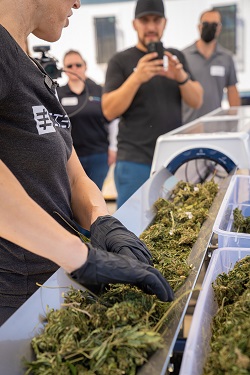 The big demo
By late afternoon, it was time to put the full Mobius
processing line to the test. Spectators huddled beneath a white canopy outside the loading dock, protecting them from the intense summer heat.

Standing at one end of the line, McKellar and James fed dried, unprocessed hemp into the Mobius M108S Trimmer. A conveyor belt carried the crop into a slender, cylindrical tumbler, which spun hypnotically.

The M108S Trimmer works by using vacuumed air to pull the hemp against a series of rotating blades, shielded by a metal screen with slits just large enough for stems and leaves.

One automated trimmer can process between 30-60 pounds of dried hemp and cannabis per hour, according to Mobius. That is dramatically faster than hand-trimming — one worker might be able to trim 1.5 pounds per day, meaning it would take up to 40 workers a full day to handle what the M108S Trimmer can do in an hour.

From there, the neatly manicured buds were then carried up and into the hopper leading to the new M9 sorter, where they ran along the noodle belts until they fell into one of several bins organized by size and grade.

James compared progress in hemp and cannabis technology to similar innovations in other areas of traditional agriculture and pharmaceuticals.

“You couldn’t imagine things being done agriculturally like they would have been done 300 years ago,” James said. “But because this industry has been in the black and gray area, there just wasn’t equipment developed to automate it.”

As smaller hemp growers consolidate into larger operations, McKellar said that is where he sees rising demand for Eteros’ product lines. The company has more than doubled in size every year since it started, McKellar said, and the momentum does not appear to be slowing anytime soon.

“We’re seeing interest from many newer, bigger companies popping up everywhere,” he said. “They’re the ones that need our equipment. They can keep growing because they have a competitive advantage achieved through automation.”

For Bob Lawrence at Yoté Farms, he said automation is the only way farms like his will be able to keep pace going forward. He hopes to be able to expand in year two, growing 6,000 pounds of hemp.

“With automated trimming, we will get all our ducks in a row for larger harvests,” he said.