Aurora Coast: “Our cultivar pipeline is designed to keep our products relevant and fresh

Aurora Coast is reportedly the only research center in Canada dedicated to cannabis breeding and genetics and on June 8, 2021, the company held an exclusive virtual tour of its Aurora Coast facility, hosted by general manager Nick Page and supported by the company’s experienced research team. Licensed in 2020, the Aurora Coast facility is located on Vancouver Island and spans 32,200 square feet, with greenhouse facilities accounting for 21,700 square feet. Aurora Coast is testing more than 4,500 genotypes to develop cultivars with improved cannabinoid and terpene profiles, resistance to pests and pathogens, optimized plant architecture, and faster flowering. The company also has research facilities at the University of British Columbia (UBC) and conducts research trials in most of its production facilities across Canada.

“We’re looking at some seemingly basic questions like how are cannabinoids formed, how does potency form as the flower matures, how does plant height relate to quality, etc. Answering these questions ensures that we are breeding cannabis in the right way,” says Greg.

Moreover, Greg explains that Aurora Coast goes beyond the phenotype to understand the specific genes affecting plant traits. The research facility conducts trials, extracts, and sequences DNA then compares the genetic traits to the phenotypic/physical traits such as visual quality, aroma, and chemical composition. Through this marker-assisted assessment, Aurora Coast has identified a region in the cannabis genome that increases potency.

“With this knowledge, we can sequence the DNA from young plants and choose only the cultivars that will produce the desired potency, allowing us to breed more efficiently,” explains Greg.

In the long term, Greg expects that Aurora Coast will continue to explore breeding efforts for outdoor-grown crops. The company released Goldberry Kush in 2020, which was sold through the medical channel and has performed very well. The cultivar matures early, produces a good yield and potency, and has a strong berry aroma.

The research facility is focused on developing cultivars that suit growers but also the consumers. On the grower side, Aurora Coast strives to develop cultivars that will adapt to a variety of growing environments, including greenhouses without supplemental lighting, those with high-pressure sodium lights, those with LEDs, indoor farms, etc.

“Each Aurora site has different growing conditions; some have HPS, some have LED, some have a hybrid. We want to get data in all of these environments to determine which cultivars are the jack of all trades,” Andrew explains. 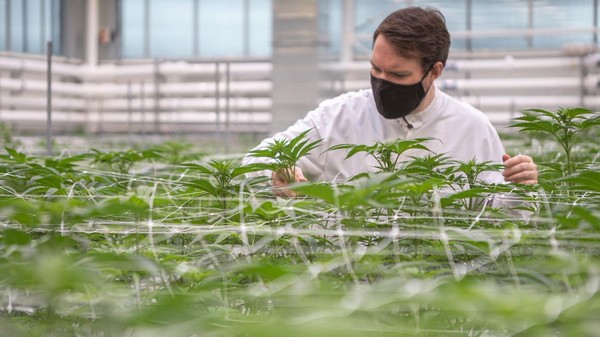 Adapting to shifting industry trends
When asked about disruptive technologies in the cannabis industry, Andrew explains that the industry will likely shift from mother-clone propagation methods to seed-based propagation. With an estimated 10-15% of the growing area typically being devoted to mother plants which are then cloned and rooted, moving towards seed-based propagation will allow growers to increase their space use efficiency, avoid timing issues and improve disease management within the growing area. However, seed-based propagation is more challenging from a genetic perspective due to the inherent variability in seed material, so it remains a long-term goal for Aurora Coast.

Aurora Coast is currently focused on the dry flower market but is looking to develop cultivars well suited to postharvest processing. In fact, Andrew says that they have identified cultivars whose ease of milling, trichome properties, and other traits make them ideal for processing.

The Aurora Coast team is keen to welcome government officials, press, and other contacts to the facility in Fall 2021, once COVID restrictions have been eased.

*Products are not available for the EU market