There is a general consensus in the industry that cannabis growers are pushing the boundaries of vertical farming, showing how a vertical cultivation setting can be highly profitable. No wonder that a lot of companies in the cannabis industry grow their cannabis vertically, in buildings that are not large per se, but rather high enough to afford such a growing methodology.

While cannabis vertical farming operations in the US have been quite often in the spotlight, the same cannot be said of EU-based operations. There is one specifically that is based in Switzerland that has relied on vertical farming since the inception of the company. Cannerald decided to go for vertical farming for different reasons. “In Switzerland, buying a building is very expensive,” Levin Amweg, co-founder of Cannerald, says. “So, we wanted to make use of the entirety of the available space. If we grew single layer, it would not be as efficient, and money would be wasted on renting a space that’s not being fully used. On top of that, I believe vertical farming is going to be the future, and we cannabis growers are proving that this methodology not only works but can also be very profitable.”

Cannabis showing the way
Levin indeed recounts a vegetable grower who got into vertical growing thanks to cannabis. “The majority of vegetable growers are used to growing single layer, but as humanity grows, vertical farming can address challenges with the food supply chain,” he says. Challenges are not as such for the cannabis supply chain as of yet. “We are at the beginning of the industry, especially here in Europe,” Levin observes. “But in the future, when such challenges might arise, vertical farming would be able to step up and allow patients to rely on a steady medicine supply.” This was one of the reasons why Levin and Cannerald decided to grow vertically right away. “We save a lot of space, and we can be more efficient,” he says.

Facing disruptions
Yet, the whole world experienced issues with supply chains over the last year – issues that have nothing to do with vertical farming per se. Such supply chain disruptions represented real challenges for those growers that were in the process of expanding. Cannerald was indeed one of them. “We were planning to expand our footprint and add more vertical racks,” Levin remarks. “Yet, the supply chain disruption caused by the global pandemic prevented us from getting racks in time. The shortest time we had to wait was 3 months, and we couldn’t afford to wait all that time.” That’s when Levin reached out to Pipp Horticulture, one of the companies in vertical farming supplies. “We saw the Pipp’s racks, and we contacted them to get more insights. They were extremely friendly, we had an introduction call and they told us everything we wanted to know and even more. After the call, we decided to go with Pipp.” 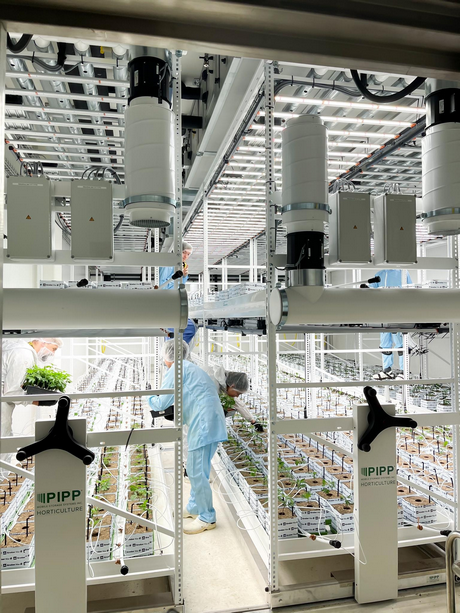 “Initially, when we were comparing our racks with the Pipp’s, we were a little worried that the frame wouldn’t be stable enough. We are not engineers, so we just got worried!” Levin jokingly says. “So, we got the racks and we were like ‘how should this work’? Then, we started putting it all together, and it was extremely quick: when Pipp’s representative contacted us to give us the document and instruction to build the racks, we told them that we actually mounted them already. They couldn’t believe that, and it was just generally very funny to hear their reaction. All in all, I think this says a lot about the ease of installation of these racks. But the thing that impressed me, in the end, was that these racks were actually so stable, they exceeded our expectations by a lot.” At the same time, Levin explains that one feature made the Pipp’s racks a no-brainer.

“Our old systems don’t have a drain system,” he says “So, initially we had to design the whole irrigation part as well as find a way to implement that into our vertical racks. With Pipp, it was the complete opposite: we just hooked them to the irrigation, and they were up and running. I guess also this explains why it took us so little time to build them up!”

Cannerald has also applied to the Swiss adult-use cannabis trial, and Levin has already seen that a lot of people have sent an application to be part of this trial. “It’s understandable why so many people want to get into this,” Levin points out. “On the one hand, it’s good, as it shows the interest from both the public and businesses in such an endeavor. On the other hand, I hardly believe that the majority of the applicants can supply compliant, high-quality cannabis. In the end, I think 90% of them will be scraped out, and only the best players will partake in the program, immediately setting the standards of the Swiss adult-use cannabis industry.”