With young plant production as the cornerstone for successful horticultural operations, the importance of starting with a high quality liner or plug is paramount. That is why Jiffy has spent the last twenty years continuously improving its Jiffy Preforma plugs. Jiffy Preforma is a high-quality plug used in multiple horticultural subsectors including floriculture, cannabis and hemp, hydroponics and vertical farming.

“We’re not just selling a product with peat and perlite or peat and coir. We look at the grower, the environment, the time frame and the systems in place. We then put together different types of products according to these parameters,” explains Mike Cade, product manager for Preforma.

Jiffy Preforma is initially prepared as a slurry according to the grower’s needs, after which Jiffy fills the trays for the clients and immediately wraps them to maintain the proper moisture level. The plugs are then shipped to the growers within 7-14 days, ensuring that growers receive the fresh plugs right when they are needed. Another advantage of Jiffy Preforma is that a variety of trays can be filled with the substrate so the client does not need to change anything about their process or tray sizes when purchasing the plugs. The plugs are also dibbled according to the grower’s needs, meaning that Jiffy has multiple shaped impressions for creating a hole into which the seed is sown. For cuttings and TC material, they can specify a single or multiple pin dibble, or even cut the plugs nearly in half for ease of placement. 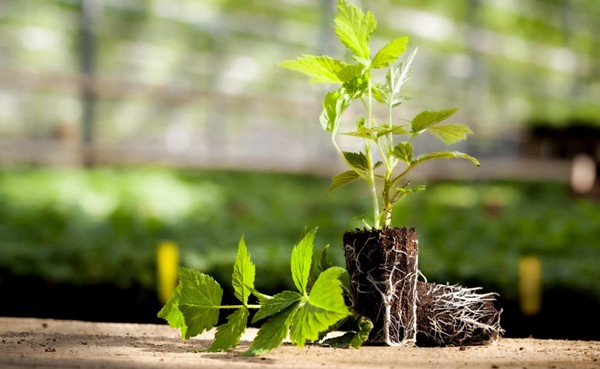 According to Mike, the high-quality plugs provide multiple benefits to growers, all of which center around improved efficiency. Firstly, Preforma was initially designed specifically for automated horticultural systems as the product withstands mechanical movements quite well. Similarly, Jiffy Preforma’s strength has proven useful for the long-distance shipping of simple plugs, plant cuttings, seedlings, etc.

"Whereas loose-fill media or weaker plugs typically disintegrate when overturned or jostled, Jiffy Preforma maintains its shape and protects seedlings against root damage."

"Improved performance in automated settings and throughout transportation remain key advantages of using Preforma but in the 20 years since we began developing the product," the Jiffy team says and adds that the largest advantage of Jiffy Preforma is that it reportedly accelerates production by 25% in comparison to loose soil and other competitor plugs. "This 25% increase is the result of faster rooting and elimination of transplant shock."

“One of the advantages is how quickly growers can pick up that plant tray and transplant them. Hemp producers could finish a plug in 8-10 days and get more trays into production quickly. By the end of the season, they were getting 25% more production in the same space. We’re seeing the same thing in hydroponic and cannabis production because they have a limited nursery area, which Jiffy Preforma allows them to turn over quickly,” says Mike.

Jiffy Preforma is produced in four locations across the globe, including the United States, Spain, the Netherlands and Japan which ensures the product’s global distribution. While Jiffy Preforma costs more than loose-fill rooting media, Mike explained that looking at a product’s purchase price cannot be the only deciding factor.

“We need individuals who are wise enough to understand that cost savings come through different stages of production. Even if loose-fill is cheaper or can be produced by the grower, the full savings need to be considered over the entire production cycle,” explains Mike. With Jiffy Preforma consistently producing plugs 30% faster than its competitors, growers can expect faster seedling turnaround in the nurseries and, as a result, increased yields and productivity.