Flowering plants dominate most terrestrial ecosystems, providing the bulk of human food. However, their origin has been a mystery since the earliest days of evolutionary thought.

Angiosperm flowers are hugely diverse. The key to clarifying the origin of flowers and how angiosperms might be related to other kinds of plants is understanding the evolution of the parts of the flower, especially angiosperm seeds and the fruits in which the seeds develop.

Fossil seed-bearing structures preserved in a newly discovered Early Cretaceous-silicified peat in Inner Mongolia, China, provide a partial answer to the origin of flowering plants, according to a study led by Prof. SHI Gongle from the Nanjing Institute of Geology and Paleontology of the Chinese Academy of Sciences (NIGPAS).

The fossils, which date from about 126 million years ago, support an earlier idea that the distinctive outer covering of developing seeds of flowering plants—the so-called second integument—is fundamentally comparable to structures that occur in certain extinct non-angiosperm seed plants from the "Age of Dinosaurs." 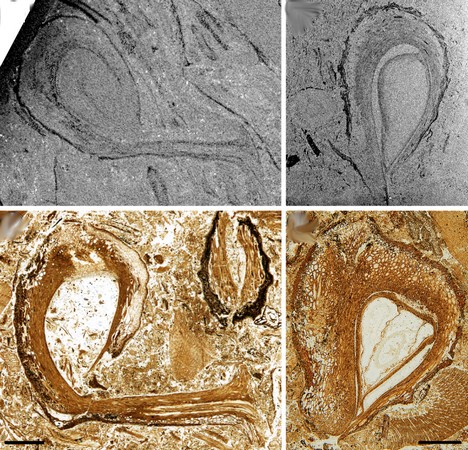 Recurved structures
These fossils, exceptionally well preserved and abundant in the silicified peat from China, have two seeds enclosed inside a specialized recurved structure—the cupule.

Similar cupules occur in several groups of extinct plants from the Mesozoic that are known only from fossils, and while it has been suggested some of these cupules may be precursors of the second integument of flowering plants, discussions have been hampered by inadequate information.

The new fossils from China, along with the reexamination of previously described fossils, suggest that the recurved cupules found in several groups of extinct seed plants from the Mesozoic are all fundamentally similar and are likely the precursors of the second integument of flowering plants.

The recurved structure seen in the young seeds of flowering plants is therefore a holdover from an earlier pre-angiosperm phase of evolution. Variation among extinct Mesozoic seed plants in the number of seeds per cupule and other features likely reflect differences relating to pollination, as well as seed output, protection, and dispersal.

Recognition of extinct seed plants with a structure comparable to a key feature of living angiosperms provides a partial answer to the question of flowering plant origins. It also helps focus future work on understanding how living and fossil groups of seed plants are interrelated, and has important implications for ideas on the origin of another diagnostic feature of flowering plants that evidently came later—the carpel—the structure that forms the fruit wall in which the seeds develop.